Home Archives Profile Subscribe
Patchwork Forest, or How My Crafty Ambitions Spiraled Out of Control Once Again
Audio Book Review: The Daughter of Smoke and Bone Trilogy by Laini Taylor

Book Review: The City We Became by N. K. Jemisin

All of that stuff is true. All the other worlds that human beings believe in, via group myths or spiritual visitations or even imaginations if they’re vivid enough, they exist. Imagining a world creates it, if it isn’t already there. That’s the great secret of existence: it’s supersensitive to thought. Decisions, wishes, lies—that’s all you need to create a new universe. Every human being on this planet spins off thousands between birth and death, although there’s something about the way our minds work that keeps us from noticing. In every moment, we’re constantly moving in multiple dimensions—we think we’re sitting still, but we’re actually falling from one universe to the next to the next, so fast that it all blends together, like… like animation. Except there’s a lot more than just images flipping past.

The older I get, and the more books I read, the pickier I become about what I actually want to spend time reading. While I firmly believe there is a book for everyone and thus no genre or writing style is “better” than another (by “better” I mean…proof of some sort of superior intelligence being inherent within the reading of it), that doesn’t mean that I have to, or even want to (yes! Even as a librarian!), read all the books or all the genres. I like specific things, and I also like to be challenged in specific ways by books—I like a book that has something that resonates with part of my identity, but also has other things that make me question my ideas, beliefs, and/or worldview.

In my twenties I loved fantasy that was set within a medieval European world view. I still love that kind of fantasy, but only if it has some new edge to it; I don’t want to reread the same old story by a different author. Same with Tolkien-esque tales…there’s got to be some kind of twist. And the cool thing with fantasy is that it has endless possibilities. This is one reason N. K. Jemisin is one of my favorite writers. Her novels are fantasy…but like nothing else. In fact, even putting them in the “fantasy” genre is kind of limiting, as there is often science involved in her world. Speculative fiction might be better. She also explores racism, gender issues, cultures, the influence of prejudice, art, dogma and belief within a society. All while building believable, living worlds. (Maybe because they include racism et al.)  At any rate, she is a trope maker rather than an adherent, and I have loved the places she’s taken me. 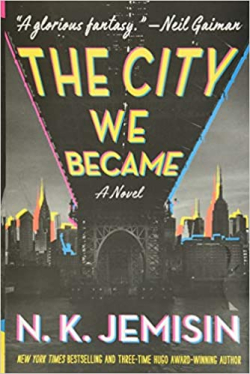 Her newest book, The City We Became, is an urban fantasy about New York City. It is based on the concept of parallel universes, or the multiverse. This is a concept I am fascinated with, as I often think “who would I be if I had made a different choice?” about different turning points in my life. Not really with regret, but curiosity. In the multiverse concept, there is another universe where I did choose differently and so I exist there as still myself but in a different kind of life. Some books explore those possibilities, but in The City We Became, the multiverse goes in a different direction. What if cities become living entities within the larger realm of the multiverse? And what if other entities don’t want the cities to exist? And what would happen if New York became such a living city?

I’ve only been to New York City twice, so I can hardly call myself a person who knows the city. Not at all. But I did love my experiences in New York. I’ve also had a tiny little taste of other cities—London, Paris, Amsterdam, Rome, Florence, Venice, San Francisco. Even with those small experiences, I can recognize how each city has its own spirit, its own identity, even within the similar characteristics cities have. So I was absolutely willing to go along with where the story took me. Recognizing some of the places the characters experience in New York was the thing that resonated with me.

In the book, each borough of New York City has its own avatar, a person who becomes the larger entity of the borough, able to protect it and also see parts of the multiverse. There is also a New York City avatar, another person who is the whole of the city, and he is the avatar who IS the city. (Obviously once you are reading the book, this is explained in less clunky ways than I am explaining.) Each avatar embodies its borough’s qualities in different ways. The NYC avatar must, as with all living cities, battle against the other forces that don’t want the city to live (in New Orleans, for example, the avatar lost the battle and the city didn’t become alive). He wins, but only barely, and falls into a sort of coma. Then, as each borough avatar begins to realize what is happening to him/her, their conflict is to come together so they can wake him.

All while battling the invasive force that wants to kill New York City, so it isn’t a living city.

Reading this book as the end of trump’s presidency finally came about was an interesting experience. The destructive force moves throughout the city as a sort of vegetative mass, tendrils growing both in the structures of the city and within the people themselves. When, for example, the Manhattan avatar manages to destroy the enormous tendril he finds on the FDR, the remnants are squished on tires and then driven throughout the city. It spreads partly by the decisions and actions of people, which to me felt deeply representative of what is happening in the United States right now…this strange creeping dogma spreading, and almost everyone is oblivious of the damage it is doing.

One thing that frustrated me is Aislyn, the Staten Island avatar. She is the only white avatar, and she resists joining the others. Part of me thought…wait a second. Why are we making the white character the narrow-minded, blinded-by-fear character? But…I pushed back against that thought. Why can’t the white character be the weak one? Just because *I* am also white? And then I thought…see, this is why I love Jemisin. She pushes me to think outside of my own comfortable world view. Aislynn annoyed me because she acted in ways that white people DO act but in ways I wish they (we?) wouldn't. But I am also looking forward to seeing how she changes. Hoping she changes...at least thinking she has the capacity to change.

(Mostly unrelated side note: If I had ever had another daughter, her name would’ve been Aislynne Hannah.)

The book ends not with a cliffhanger, but also clearly the story isn’t finished. I didn’t realize this is a planned trilogy until after I had bought it, but it doesn’t matter. I will happily break my “no unfinished series” reading rule for N. K. Jemisin. Also, I cannot wait to go back to NYC, because there are so many places this book introduced to me that I want to see.

***WARNING*** I’m going to make a list below of what is happening with each of the characters at the end of this book, so that when the second one comes out I can remember what seems necessary. So, don’t read any further if you don’t want spoilers.

Aislyn is still in Staten Island with the Woman in White, basically allowing her to overtake that borough.

The other avatars made it through waking up NYC.

Hong made it back to Hong Kong.

The enemy is the city of R’lyeh, which comes from Lovecraft’s stories. Maybe actually read some Lovecraft before the second book comes out?

Remember: Brooklyn’s house is about to be taken from her by the “Better New York” foundation; Bel Nguyen is Manny’s roommate (I hope we see him again); Connell is the guy that Aislynn’s dad brings home but is also the name of the baby her mother aborted.