Audio Book Review: The Daughter of Smoke and Bone Trilogy by Laini Taylor

Be your own place of safety, she told herself, straightening. No crossbar in the world could protect her from what lay ahead, and neither could a tiny knife ticked in her boot - though there her tiny knife would most certainly remain - and neither could a man, not even Akiva. She had to be her own strength, complete unto herself. 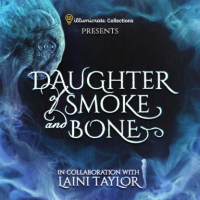 In December, when I started wrapping Christmas presents, I decided I wanted to listen to an audio book. Something I’d read before, so if I didn’t pay exact attention I wouldn’t be totally lost. As I had just received my Illumicrate edition of Laini Taylor’s novel Daughter of Smoke and Bone AND as it was available on my Overdrive app, I decided to listen to it.

She’s one of my favorite authors, so of course I’ve read these books before. The first one twice, in fact. (Alas, I only wrote a book note about the last one, Dreams of Gods and Monsters.) It’s also a series I love recommending to many different kinds of readers at the library. Ours is shelved in the YA section, but I think this reads just as well for adults. It’s intensely romantic without being overtly sexual in its descriptions, so it’s a good recommend for my conservative community’s preferences for their daughters. And, honestly, even though the main character is a girl, it also has such great male characters that boys will like it too. (Nathan has read it, and I’m pretty sure Jake has too.

One thing I am hesitant with as far as audio books go is the reader’s voice. It takes me about, oh…a minute of listening to know if I like it or not, if it fits well with how I tink I’ll “hear” the story in my head (or if I’ve read the book, how I did hear it), and if it doesn’t I won’t keep listening. (My least-favorite narrator was for the novel Swamplandia!, which was entirely too young. My favorite match of a narrator was for the novel The Postmistress, as she had the perfect east-coast accent. I also think that was the first audio book I finished all the way through.) The narrator of this series, Khristine Hvam, was exactly right for telling Karou and Akiva’s tale.

Listening to these audio books reminded me of remembering a dream. That feeling you have when something at, say, 2:25 in the afternoon, triggers your memory of what you had dreamed (but kind-of forgotten) the night before. I remembered the vague outlines of the story, rather than the details, but just before a part of the story was told, I’d start to remember it. This was a kind of pleasure, the voice triggering the memory and the way the images came into my mind before I heard the words describing them.

I listened to about half of the first book in the trilogy while doing Christmas prep (wrapping and the Christmas-eve baking) but then let it go until my surgery, when I picked it back up. (Glad it was still available!) And I have to say, this trilogy has been the perfect companion to my recuperation. It’s taken my mind off my desire to be outside moving my body, kept me entertained when I wasn’t reading, and just…Karou, Akiva, Zusannah et al became sort of my companions. Which sounds a little bit cheesy but is also true.

What I love about this trilogy (and her other books) is that it doesn’t feel derivative of anything else. It has elements of other fantasies, angels and fantastical beasts and connections between worlds, but she creates something entirely new with them. I also like Taylor’s writing style, which is lyrical without being overwrought. Prague is a place I want to visit simply because of how it is described in this series. And I appreciate that she doesn’t stop her characters from suffering. They have painful experiences, some of them their own faults, and so they grow and change over the books.

One thing that kind of made me laugh is that I remembered the ending almost entirely wrong. In my head, it ended with a group of seven characters leaving through a portal to go out into the layered universe to fight the Nephilim. And it was nothing like that at all, but even better, because in my memory Karou and Akiva never got to be together, but, in the end, they do.

I’m glad I chose this to listen to over the past month!