Home Archives Profile Subscribe
Book Review: You Have a Match by Emma Lord
At The Intersection of Cuomo and Seuss

Book Review: How Much of These Hills is Gold by C. Pam Zhang

Because this land they live in is a land of missing things. A land stripped of its gold, its rivers, its buffalo, its Indians, its tigers, its jackals, its birds and its green and its living. To move through this land and believe Ba’s tales is to see each hill as a burial mound with its own crown of bones. Who could believe that and survive?

One of my clearest memories from childhood: we were driving home from Salt Lake City, winter evening, fresh snow, full moon. I looked out the window and saw a long, tall mountain, glowing the way mountains glow in those conditions, even in the dark. Especially in the dark. I said, “Mom! What is that mountain called?” because I wanted its name, wanted its identity. Wanted to know it. She said “ummmm, I don’t know!” in an exasperated tone and kept driving.

Another, this one a palimpsest, a layering of doing the same thing on different days in different seasons. I loved to sit in our backyard and look up at the mountains. There was a specific slope, green in spring, red for a few days in October, that I especially loved. I would look up to that slope and think I want to be right there and then I would imagine what it might be like, the softness of the grass, the brilliance of the leaves. This looking and imagining was a thing I did all through my childhood and then even after, when I came home as an adult, married and with kids. 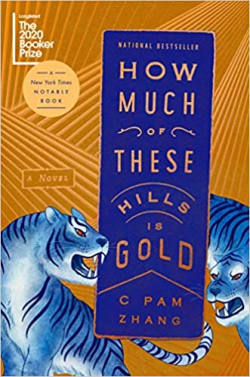 Those two memories kept coming back to me as I read C. Pam Zhang’s novel How Much of These Hills is Gold. Not because the landscape in the book is the same as mine; the book is set in the hills of California during the Gold Rush. Rolling hills with creeks and rivers polluted from mining. But because of the characters’ connection to the land: “If I had a ba,” Lucy’s father says, “then he as the sun that warmed me most days and be me sweaty-sore on others; if I had a ma, then she was the grass that held me when I lay down and slept.” My connection is different from theirs, less physical and more emotional, less immediate and more romantic. But just like Lucy, I am tied to this landscape; the mountains shaped me in ways I might not even fully understand.

How Much of These Hills is Gold is a brutal novel, which is fitting as it tells a brutal story. Lucy and her sister Sam (who is a boy for most of the story) are Asian-Americans, living with their parents Ba and Ma in a chicken coop converted to a tiny house on land owned by the coal mine. Sometimes Lucy gets to go to school, others she works in the mine (for far less pay because she is a girl). They don’t have enough food and their living conditions are squalid no matter how they work to keep the place clean; their only richness is in that desolate land and in stories. Ba tells them stories about how the land used to be and Ma about the far-away place she came from, which they can catch the scent of in the rare times Ma opens the trunk she brought from there.

After a particularly rainy, difficult season, Ma loses the baby she was pregnant with and dies, sending Ba back to drinking. When he, too, dies, Lucy and Sam start on a quest of sorts, carrying the trunk that Sam put Ba’s body in on the horse they stole from Lucy’s erstwhile teacher, looking for the perfect place to bury him.

This book. I go back to that word: brutal. // harsh, severe. // unpleasantly accurate and incisive. // grossly ruthless or unfeeling.

No. The book itself is none of those things. It is so beautifully written that the prose itself makes me think of gold. The act of telling Lucy’s brutal story in such a way helps underscores the harshness of it. The ruthlessness, not only of the land but of the society. The unfeeling way that people turn away from their poverty because of their race. There is no real reprieve for any of the characters, because even as it seems like things might be improving, the atmosphere grows ominous with some future disaster.

This isn’t a novel that everyone will love. Its structure is untraditional and the ending will be deeply frustrating to readers who like everything neatly tied up. It isn’t mainstream fiction and it is difficult to read. (I had to take a break in the middle, put it down and read something fluffy just to give my strung-out heart a break.) But the world is so compelling, the writing so beautiful, the characters so real. It makes you consider: what is gold? In the sense of: what has value, and there are no simple answers to that question. And that connection to the land—for me, that was the thing that made this book resonate for me.