Home Archives Profile Subscribe
I Touch Glitter Every Day: On Preemptive Apologies and Loving My Scrapbooking Self
Book Review: The Fifth Season by N. K. Jemisin

Mattie said all the things that looked dead were just dormant. As soon as the rains came they would sprout leaves and grow. It happened so fast, she said, you could practically watch it.

I think if you are a lifelong reader you’ll share this characteristic: images from books stay stuck in your head, even when the details of the story or the characters get lost. Sometimes they get jumbled up so you’re not even 100% sure which book that image came from. And then you decide to reread something and are sometimes surprised: Ah, that image goes here! 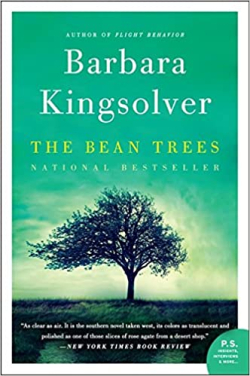 I first read The Bean Trees in about 1990 or 1991, and Taylor’s adventurous spirit was inspiring to me. (I still want to take a cross-country road trip on my own one day, but hopefully with a more reliable car.) She leaves the small town in Kentucky where she has spent the first twenty or so years of her life, having managed to avoid the fate of many of her high-school classmates (pregnancy and early marriage), wanting to create some new version of herself. (She also changed her name; in Kentucky, she was Marietta.) She’s planning on settling wherever her car gives out and she makes it all the way to Tucson, with a little wrinkle along the way: in Oklahoma, at a small diner along the highway, someone gives her a baby. In Tucson her tires give out, and so she starts making her life there.

To read this story when I was also young and trying to create a new version of myself was one of those happy bookish coincidences, when a book comes into your life at exactly the right time. I didn’t do anything brave like Taylor, but her adventures gave me the idea that people along the way, whatever way I went, would help me. An idea that didn’t exactly come to fruition, but it still gave me courage. And every once in a while, an image from the story would filter into my head: Taylor giving Turtle a bath for the first time and discovering both that the baby was a girl and that she had been abused. The park in the desert city with its bower of wisteria. The canyon where Taylor and her growing tribe picnic and the cold stream she jumps into. The desperate and unknown fates of the immigrants helped by Mattie. Lou Ann’s salsa and Poppy’s red outfits.

This year, for my turn at hosting the library’s book club, I chose The Bean Trees. Considering our current issues, I thought that reading a book that explores the problems of immigrants would be timely. It was—part of the discussion turned to this topic, and the members had many good things to say, even if we arrived at a consensus that we haven’t solved this problem yet because it is so complicated.

What I didn’t expect was to find the book home of one of those floating images.

I’d carried it in my head for all those years: some characters admiring a flower that only bloomed once a year, at night. In my head they were like fuchsia flowers, except larger and made out of silver the texture of gold flake, and they had a lemony scent. That image would sometimes just float into my head, usually when I was at a nursery or working in my flower garden. Of course I could have researched it, the kind of flower, the book it came from, but those things didn’t really matter. It was just that image, a silver flower blooming in the dark. I just kept it and thought about it when it came to me.

It’s in The Bean Trees. In the book, when Taylor is trying to figure out how she will be able to keep Turtle legally, one night the neighbors knock on their door and ask them to bring Turtle over for a surprise. It is the night blooming cereus, a plant that looks big and kind of ugly and very dry for almost the entire year. It only blooms once, and they manage to know when it will bloom when Poppy, who is blind, smells it. “The flowers themselves were not spiny, but made of some nearly transparent material that looked as though it would shrivel and bruise if you touched it. The petals stood out in starry rays, and in the center of each flower there was a complicated construction of silvery threads shaped like a pair of cupped hands catching moonlight.”

I’m glad to have the context of this image, even if I didn’t need it, because it helped me understand why it has stayed with me (aside from the beauty of the actual image of the flowers). It’s a little heavy-handed (this is, after all, Kingsolver’s first novel), but the meaning resonates: sometimes you get to find light in darkness. Sometimes someone who loves you brings you beauty when you need it. Peace, which is fleeting, still blossoms when you least expect it. Watch for the signs. Stop and be fully inside the beautiful moments.

There is always a bit of danger to rereading something you once loved. You bring a different self to a story that hasn’t changed. You know other things that you didn’t know when you first read it, and those things can make it so you despise the story now. I’m grateful that didn’t happen with The Bean Trees. I’m glad I reread it so I can remember to watch for the signs of a flower about to blossom.