Home Archives Profile Subscribe
Scrapbook Cull: What I've Learned So Far
What I Learned from My Blog Challenge

Book Review: Lady in the Lake by Laura Lippman

How childish grown men could be, in a way women never were, not in Maddie's experience. Sullen and grumpy, still playing by the sandlot rules, obsessed with fairness and stature. Of course women cared about stature, too, but they learned early to surrender any idea that life was a series of fair exchanges. A girl discovered almost in the cradle that things would never be fair.

Every year, I try to read at least one book that is outside my usual choices. I am not devoted to any one specific genre; when someone asks me what my favorite kind of book is, I usually answer "the well-written kind." I'll read in any genre of fiction, really, so long as the writing style works for me, and honestly: there are fewer books in some genres that fulfill my "I love this writing!" need. Often, the goal of much genre fiction is  to meet the requirements of the genre, which are less about writing style and more about plot.
(I rewrote that last paragraph several times because I don't want to sound pedantic or uppity. One of the things I've learned well and truly as a librarian is that there are types of books for everyone, and you get to decide what works for you. I just have a specific taste that works for me.)
So, just to keep myself a more well-rounded reader and librarian, I often try to hustle up a mainstream genre book that doesn't drive me bonkers. I like doing this because I've found many books I ended up really loving. I still am not a fan of meets-all-the-checkboxes genre fiction, but if the book breaks the rules a bit, I'm happy. (For example, I don't love most romances but The Time Traveler's Wife, a very romantic book, is one of my favorite novels.) 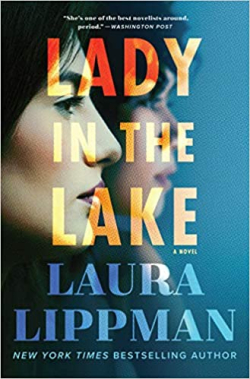 Lady in the Lake by Laura Lippman was my recent attempt at genre fiction. The reviews made it seem like a mystery/thriller/historical fiction combo. I don't love mystery series that have the same detective figuring out cases, but I do enjoy a mystery that explores something more than just "who done it." The Booklist review, which says the book includes " a Greek chorus–like assembly of voices, some fictional, some historical (including former Baltimore Oriole Paul Blair and Violet Wilson Whyte, the first black person to be appointed to the city's police force), who add texture to the portrayal of the city's racial politics," sold me. (I thought it would be like an adult version of Thirteen Doorways, Wolves Behind them All, as one of the voices is the murdered women's.)
It tells the story of Maddie Schwartz, who at 37 decides to divorce her husband, leave her big house in the Baltimore suburbs, and explore who she really wants to be. She gets a job at a newspaper, working as a sort of assistant, and discovers she likes the world of newspapers, even if getting any sort of recognition, as a woman in the 1960s, is difficult. She becomes a little bit obsessed with discovering, and hopefully reporting on, who murdered a young Black woman, Cleo Sherwood, whose body was found in a lake.
I think it's important to remember, when considering my response, that I chose this book because it seemed like it would fit my genre-but-not-too-genre expectations. I'm just not really sure how to label Lady in the Lake. It wasn't super thrilling in the sense that I was never on the edge of my seat, heart pounding, worried that a character was about to die. And as for the mystery, the way it is solved eventually has nothing to do with Maddie, other than that it helps her finally start to be seen as a reporter. There is a twist at the end that I didn't see coming, but it was explained so swiftly that I didn't really get to fall inside it, if that makes sense.
That said, I did enjoy this novel. The mystery and the thriller-ness really are the backstory; really, the story is about Maddie trying to figure out what type of person she is, now that she is divorced.  She bumps into the social restrictions of her gender, religion, and status, and has to figure out what is worth trying to push over and what she has to live with. How does she negotiate the world in her divorcee status, especially since her son really wants nothing to do with her, so in a sense she is also not a mother? What does she like, what does she not want to engage in, how does she want to be within her newly-made freedom? She is a very different type of woman than I am, the kind of beautiful woman who knows how to flirt and how to use her beauty to get men to do what she wants, but her struggles with her self-identity are something I deeply, deeply relate to.
And Booklist got it right for me. That chorus of Greek voices, which are interspersed with the chapters telling Maddie's story, made this a book that didn't just tell the story, it played with how the story was told, and I loved that.
I'm actually not sure if this book even meets my "read some decent genre fiction" goal. It's more literary that most mysteries, but not really literary. And I felt like the ending just sort of...petered out. I'm glad I read it, but I'm not sure it will stick with me as other books have.

It sounds like an interesting book. Not sure it will hit my preferences, but I'm adding it to my list of maybes. Thanks!

Hmm interesting, I might check it out and see what other reviewers say. I had not heard of it before. Interesting what you say about genre fiction. I do read quite a bit of it because I want something to happen in my books, I need plot for the most part. I do like some of the crime fiction genre (more than some actually lol) where the same detective is solving the cases because I do enjoy the plots but more that I also love the characters and spending time with them and seeing how they develop. Like putting on a comfortable pair of shoes and walking around in them for a while.

Anyone who knows me, knows that I do not care for romance, but I mean the formulaic romance that does check all the required boxes. Books like The Time Traveler's Wife, Memoirs of a Geisha and all of Jane Austen may be considered by some to be "romance" but they do not follow that formula that I dislike, so I prefer to refer to them as "romantic" books instead? The romance is not the be all and end all of the plot.

It sounds like an interesting read, but not sure it's my type either. Do I even have a type? I don't know lol. Like, I love James Patterson's books. His "Women's Murder Club" "Maximum Ride" series are a couple of my favorites. I am in love with the "Outlander" series. I guess these days I'm more of an historical fiction kind of girl. But if the book is well written I will give a go.
Like I loved the "Harry Potter" series, but couldn't even get passed the first chapter of "Twilight".
I'm trying to do better at reading non-fiction books. I have a stack to read that is currently collecting dust because I've been procrastinating lol.

I have read 13/14 of Lippman’s Tess Monaghan series - so I enjoyed your review. Lippman really brings Baltimore to life, and Tess, the young newspaper reporter turned detective, is such a likable character. An independent and persistent English major-athlete-foodie...I enjoyed watching her and her cast of lovable loved ones grow as the series went on. Sounds like this book is in a similar vein, but featuring a character with a different but interesting dilemma. Thanks for sharing!