Recently I’ve been digging in to some older photos for scrapbooking. This is partly because I still have so many stories to tell and partly because I have so few photographs of right now. (Kaleb hates having his picture taken and basically just scowls in every photo I take. Jake is at least past the scowling phase but if I hit it at the wrong time, asking him for a picture will spark an anxiety attack. Haley’s in Pennsylvania, Nathan’s in Salt Lake City, and since I still can’t hike yet…yeah. Not many new pictures.)

One thing I’ve really appreciated in this process is being able to go back into my blog to find stories I’d forgotten. Like the first time I made chicken curry, and Nathan literally HID because he was afraid it would be gross and didn’t want to eat it, and then ended up loving it. When I blogged more consistently, and about my regular, everyday details (instead of only book reviews and political rants), I ended up saving so many great stories. And even though I don’t have many photos, there are still stories to be told. (Although…to be honest: even some of the stories are not scrapbook-able, really. I’m not one who shies away from telling hard stories, but as the kids get older, their stories are sometimes harder and they don’t really feel like mine to tell.)

So today I thought I’d throw it back to early 20-ought-style blogging and just writer a right-now list about our family. 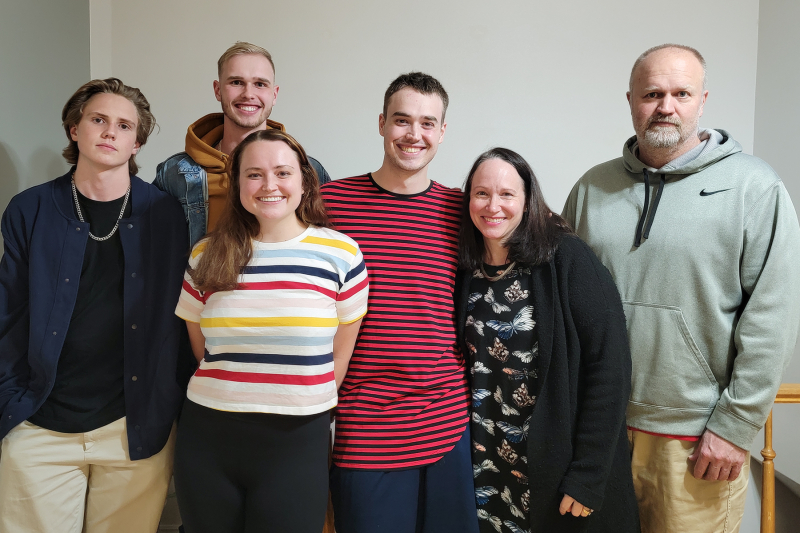 Kaleb is learning to drive. (how is my baby this old???)  He has his learner’s permit and is taking driver’s ed online. He tells me quite often how much he wants his own car. It doesn’t have to be nice, though….he’d be perfectly happy with a “butt car” as he calls it! It’s crazy how things change over time. When Haley was learning to drive we had zero intentions to buy her a car and we’d never actually purchased a used car before. It just didn’t seem within the realm of possibility somehow, and we made it work between the minivan and the Corolla. Ten years later, here we are: Kendell’s pretty good at finding the PERFECT used Corolla (not just for our kids but for Cindy’s as well) and he is starting to search for one for Kaleb.

Nathan is finding his place. Or trying to figure it out. He has struggled a bit with different things since coming home in December. (See… “different things”… not stories I feel responsible to tell.) But I think this is all pretty normal after two years of being away in Army training. He has to make a new normal, and that is hard. But it is so nice to have him so much closer. He comes down usually on Sundays, to eat with us and hang out, and Jake has started spending some weekends at Nathan’s apartment. He sends me pictures of the art he is working on and asks for help with cooking and tells me funny stories about his job (he works in a salon right now). I have loved that he is growing closer to his cousin Abby, who he works with. And hugs on a more consistent basis are pretty awesome!

Jake is doing so much better. Sometimes I even hear him whistling again. I think the fact that he had to do more stuff around the house because of my surgery (he did all the laundry) actually helped him. Navigating his mental health issues has been hard on my mother’s heart, but then I just think about how hard it is for HIM and I know my heartache is far smaller. But he is so much more than depression and anxiety, and I feel super hopeful that this year will be a turning point for him.

One thing I just adore about Haley right now is her affection for plants. She LOVES them and is super knowledgeable about different varieties, what is rare, how to care for them. I had a little ah-ha moment recently about hobbies, which probably was always obvious but I never thought about it in just this way. As adults we have All The Things we have to do. Work and housework and the to-do list and washing the car and paying the medical bills. If that is all life was…that would be kind of sad. Hobbies are one of the things that give our life meaning and depth. And I am glad she has found a hobby she loves, even in the midst of all of her med-school stress. Work or school can be meaningful, our relationships are meaningful…but hobbies also bring us a level of pleasure.

Kendell is aching to be back on the trail again. He went hiking a couple of weeks ago with Cindy and I swear…as he bustled around getting ready there was sunshine coming from his pores he was so excited to be getting out. He’s had some ankle pain and started wearing his orthotics again. I think he’s getting pretty tired of me not being fully functional, but he has really helped out a ton.

And me…I just don’t know. I am feeling stuck. I saw this image today and it made me cry: 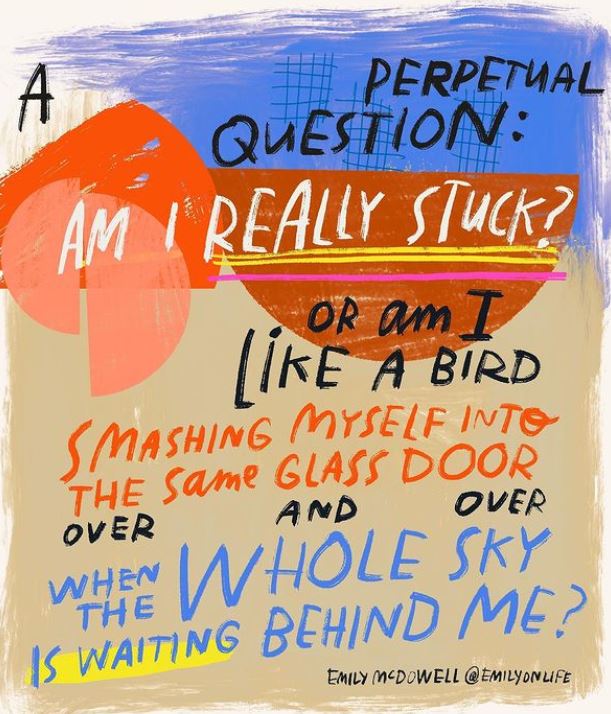 Because I AM just like the bird hitting the window, but I don’t know how to turn around. Part of it is, of course, just being immobilized by my foot, but it goes far deeper than that. It’s also my job and my marriage and my…my lack of definition. I want to find a way to feel accomplished and self-sufficient but I don’t know the route. I want to feel proud of my life instead of slightly embarrassed, like I do now, and I want some….some richness. Not really in the sense of money, but in experiences and relationships. Everything feels so thin right now (yes, like butter over too much bread).

As I went back over this post to proof it, I realized…these aren’t really stories. They are little…snapshots, I guess, of who we all are right now. Hopefully on the downside of the pandemic. Each of us in our own way trying to figure stuff out. Which is just life, I guess. And even though I didn’t write any actual stories, I’m glad I wrote this today because it brought me a sense of peace. Our life is not perfect (far from it) but I DO feel the sense of how lucky we are to have each other in the ways we do.

I really enjoyed this post--I used to write down "right now" things about my family every few months and now realize it has been a long, long time since I've done so. Time to just get a few things down again. Also, I love the new blog look. Very nice. Thanks for all that you share.

I loved reading your stories about day to day life. What a wonderful family you have. Ah, the bird hitting the window. I feel like that sometimes but couldn’t quite find the words to describe it. Things will get better. It just takes time.

I hope you find your way to turning around and embracing the whole sky. Lovely post, lovely writing, wonderful outlook.

I enjoyed this read - your snapshots are just great and something I might do in one of my journals. Your family sounds a lot like mine in various ways...I have a Nathan too who lives away from home and it is a true joy when we met up with him for lunch every so often!
xoxo

Thank you for sharing these vignettes of you and your family's lives.
I feel richer to have read this somehow.
Truly thought-provoking.

Thanks for opening up, and sharing a peek into your ife, heart, and family. I hope you will be able to get back out there soon. These are some interesting and trying times, even for me the introvert.