The Shushing Librarian Archetype is a Myth

A page putting books on the shelf. The creak of a cart wheel. Two patrons in the cookbook section, laughing quietly. Another walking towards the art section, a thin stream of music coming from her headphones. One patron types rapidly on the computer behind me, another hesitantly at the catalog. The buzz of someone's cell phone quickly silenced, the slam of an office door, the ding of the elevator as its doors open.
When I tell someone I work at a library, I am often met with a similar response: "Oh, it must be so lovely to work somewhere so quiet." (There is also the assumption that librarians just sit around reading books, which would be lovely but, alas, no.) The shushing librarian is an archetype, that, once studied or actually lived, falls apart quickly. We try to keep the noise levels manageable, and often the library is quiet, but not really. 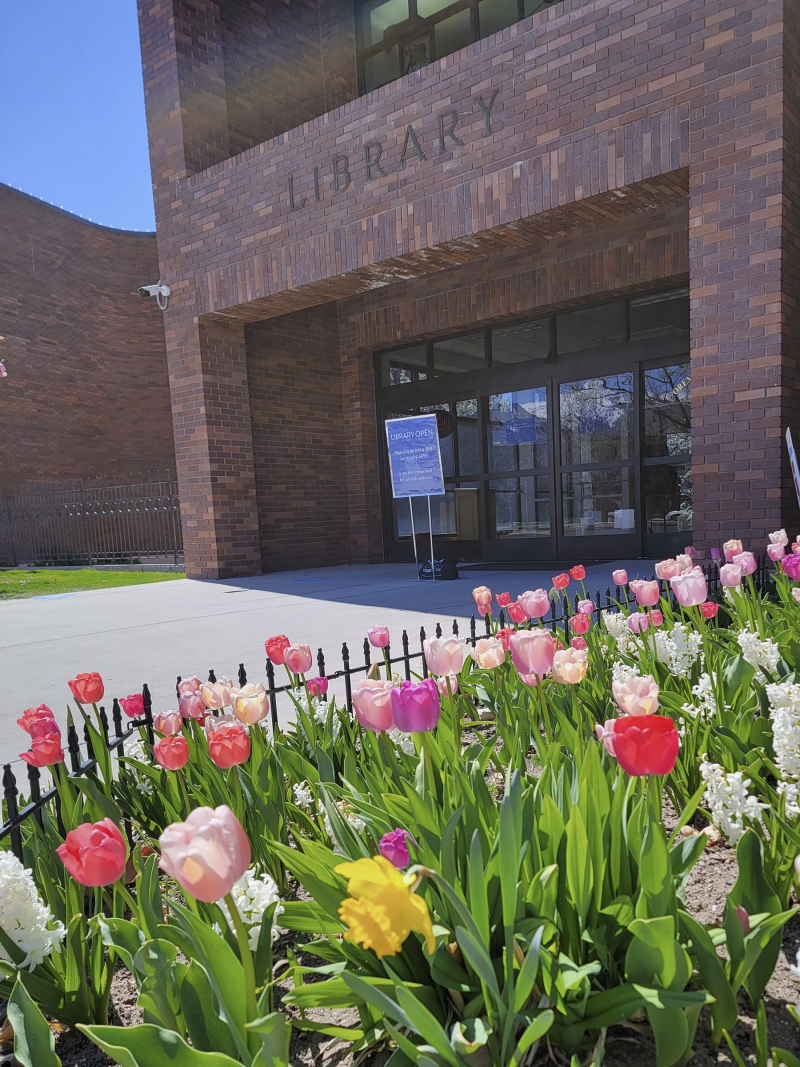 The library is a place filled with books and formed by the shapes needed to house them, but it really is a place of stories.
I didn't really expect this when I started working as a librarian nearly twelve years ago. I didn't understand how bartender-ish it can be, working as a librarian. How people tell you their stories, or small parts of them, either overtly through their requests for help finding books or directly, by just starting to talk to you.
It's also a place where stories happen. In interactions between patrons and librarians, between patrons and other patrons. Sometimes between librarians. People come to a library needing something. A book, a computer, some free wi-fi. An escape from their husband or kids or mother or annoyingly loud neighbor. Sometimes, they just need a place to sit out of the rain. To be a person who needs something can be a vulnerable position to be in, and that is often where the stories happen.
Just thought today I would share a few I took part in.
Even though the library where I work has been open for almost the entirety of the pandemic (we were closed for about seven or eight weeks but then opened with varying levels of modification), there is always someone angry or annoyed by what we aren't doing. Right now, we are open for our normal hours, and we have started putting back some of the furniture. No comfy chairs, but there are chairs at the study desks. The study rooms are not open and probably won't be for some time yet.
I had a patron this morning come to my desk and demand a study room. "I need a room right now, and the wireless password." I took a breath before responding because I could guess, by his body language and voice tone, how this would go. I explained that the study rooms are not open yet, but he could use one of the laptop bars if he wanted. He pushed back and insisted: "your colleague on the other side told me I could have a room, so I want a room." I apologized and he walked away, muttering.
He walked back across the bridge that connects our two wings. He shouted at the librarian at that desk. She called me and I said the same thing: tell him the rooms are not open. (I also said "I'm sorry he's being such a jerk" but quietly, so he didn't hear me). Then he stormed back across the bridge toward my desk. I looked right at him, daring him to catch my eye. He didn't, but he walked by and muttered something that included "pandemic" and "fucking ridiculous."
And I'm just now SO looking forward to working next week, when the statewide mask mandate will be lifted but not in city buildings. It took a pandemic to teach me that some people really are asses.
❦❦❦
Downstairs, I helped an older woman. She needed to save and then email the Word doc she'd been writing, but wasn't sure how to on our system. She very apologetically asked me for help. I always try not to read the documents a patron has created. It's none of my business and they can have their privacy, but it's impossible not to see a few words. Her document, which she explained was a letter to her brother, included the words "funeral," "mom," "inheritance" and "lawyer."
I helped her save and then showed her how to attach the document in her email, then left her to write whatever else she needed to. When she was done, she came over to thank me for helping her. It's never required to thank your librarian, but honestly it is awfully nice when someone does. She told me her document was "a very important one during a hard time for our family" and then got a little teary but didn't actually cry, and I just said "you're welcome, you enjoy the beautiful day" and she smiled at me with her eyes.
Two different people. Each needing something. But how they each approached the experience was totally different. The woman's heartfelt "thank you" contrasted with the angry man's swearing...that is the realness of the librarian experience, not sitting behind a desk in a cardigan and bun, shushing people. It is talking about books, sometimes. Often it is talking about printing or other basic computer skills. But always it is about interaction. Not all of them are positive, but I am grateful for the ones that are.

I agree with every word you typed above. It's a crap shoot from one person to the next, whether they'll be a human or an over-entitled person.
Either way, it's worth it.
Thank you for legit speaking about our career.

Lovely read!
too have been a librarian...

I love libraries and librarians. Thank you for being there to catch these stories. And thanks for sharing a bit of them (even the one about the jerk).

What a wonderful look into your world and to experience one of my favourite places from "behind the counter" if you want.

It seems like any time you work with the public, you end up with some jerks. Hopefully the kind people outnumber them.

As a library lover, I'm all for banning certain people!

You captured the Librarian’s service experience so perfectly. Thank you!

Thank you so much for sharing these stories. <3

This reminds me of how people see the spa. “It’s so quiet here!” “It’s so peaceful!” It is those things, but only because we make damned sure that is your takeaway. Thank you for sharing!

Loved reading this. Thank you. Nice to have a positive experience to balance the negative. I love your compassion. Always hard working with the public.My sister-in-law was a librarian for many years and she too has many stories. I have loved libraries my whole life. Always a treat to go there, even now.

Reading this made me miss our library so much! It's open, but we can't hang out, just drop off and quickly browse. Before the pandemic K and I spent most Wednesday afternoons at our library, and the librarians became like friends. One young one took him under her wing when she realised that he loved graphic novels as much as she did. The librarian in the multimedia section and I bonded over Prince's death, then I persuaded her to join my drumming class (which I also miss).

I'm sorry you have to deal with difficult people sometimes, but glad that some (hopefully most) of your interactions are pleasant.

Such a wonderful post and love reading your thoughts and experiences. My local library is one of the noisiest places in town. I think because it's such a vibrant, important part of our community. I miss it so much!

I so love and miss our library. I was envying you as I was reading. Imagine working in a library! Yes you sure do get to see and hear all kinds of people. I hope working there gets better for you.