I just realized it’s been almost an entire year that I’ve been dealing with my toe issue, so I thought I’d write about how my injury happened (even though I don’t really have an amazing story to tell!)

I’ve been wearing orthotics for about five years now, ever since I started having capsulitis in my second toe on my left foot. (This is inflammation in the joint that connects your toe to your foot.) I wore them in both shoes to keep things even, although my right foot didn’t hurt in the same way. Then, last year after our epic May hike to Silver Glance Lake, my right second toe started hurting in the same way. 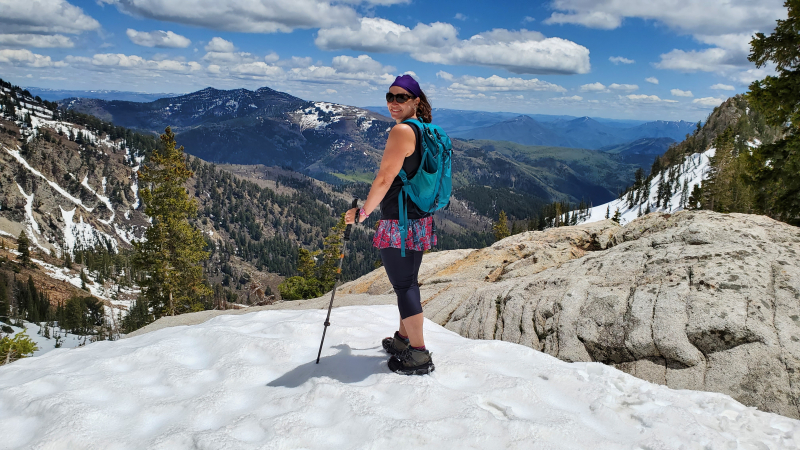 The hike to Silver Glance Lake was epic because of the fresh May snow up there!

Since I was already wearing orthotics to help with capsulitis, I wasn’t sure what to do. At first, like all good runners, I just ignored it. Shook it off. But it kept getting worse so finally I visited my podiatrist.

We tried several different things. Some taping with an extra insert to relieve the pressure on the toe joint (didn’t work). Shorter runs. Then fewer runs. Then a week off. Still hurting. So I got a cortisone shot, which helped for a little while. I kept running and building up my mileage, but about a month later it started hurting again. This time I got a second shot and then took three weeks off from running. (I was still hiking, though.) I stretched, I massaged, I iced. It was feeling pretty good at the end of the three weeks, so one day I thought OK, this is it…going to start running again today.

Kendell and I went to Costco and then we went to a park where I intended on starting my run. I would run home from there, only about two miles from home, and start out slow, walking for three minutes, running for two. Before he left, I asked him to take a running pic for me, because I wanted to write about how that “first run back” felt, and it is much easier for him to just take it than for me to find a spot to prop my phone and then work with the timer for a few attempts. I walked a bit to warm up my legs, got him positioned, and started running toward him. 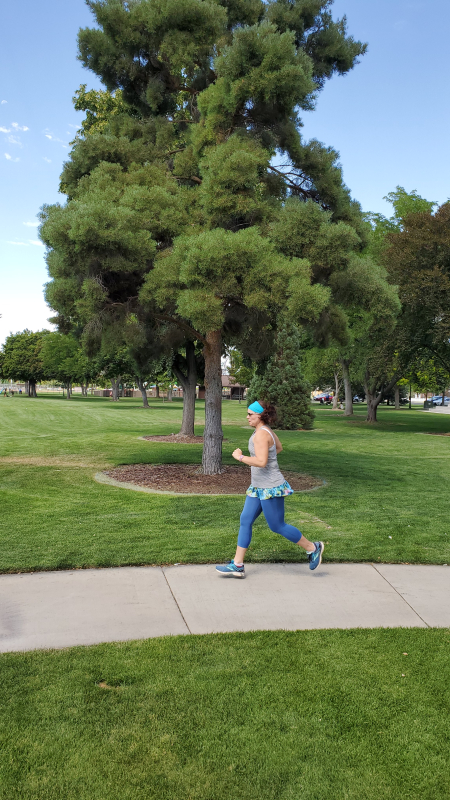 I think it was either my third or fifth step, maybe my seventh. But just seconds into my run, something tore on the bottom of my foot. I didn’t really hear it, but the tear felt like a sound. Like the sound of wet cotton fabric tearing. It stopped me in my tracks (luckily Kendell had gotten a few shots already!) but I tried to shake it off. Shake, shake, shake, literally, just shook my foot. Rotated my ankle in circles. Wiggled my toes. Walked a bit. Then I tried running back toward him, and yeah: No. It was super painful and my toe felt wobbly.

So instead of running home I hobbled back to the car and had him drive me home.

This was the day before we were going to leave for our trip to California to visit Nathan. I had all sorts of plans for going running with him while we were in Monterrey, and he had a gorgeous route all planned out. But…running? I couldn’t even really walk well. With EVERY step, my toe would either slip into or out of joint, depending on where it was on the previous step. On our first day there, we walked around the beaches on Thirteen Mile Drive and gah…it was uncomfortable. Even worse than normal on the sand with bare feet. (But oh. It felt so good to hold my foot in the cold water!) So, no running on the beach during that trip. No nice long run with my soldier son on his favorite route. Just dislocating my toe over and over.

After months of wrangling with my health insurance, I finally got an MRI scheduled. (Side rant: They kept pushing back with things they wanted me to do before I had the MRI. Time off of running. A cortisone shot. PT. Two weeks of taking an anti-inflammatory. All things that I had already done and THEY HAD ALREADY PAID FOR.) The results only confirmed my podiatrist’s diagnosis of a torn plantar plate, the thing we were trying to avoid. Because my doctor’s surgery schedule was full into November, I decided to just wait until January so I could have an entire year of being at my deductible.

This is a great picture to explain what I tore: 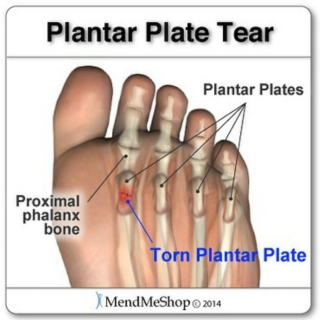 That tendon helps to hold your toe into the joint where it joins your foot. You have one for each toe, but the second toe is the one most often torn.

While I waited for my surgery, my toe continued to slip in and out of joint. I almost got used to it. I found the ONE pair of shoes I could wear at work that held my foot flat enough to keep the joint stable so it didn’t pop around as much. As the tendon got worse, sometimes the toe would be so out of joint it was just lodged on the top of my foot. (Fairly unpleasant.) Thankfully, I could still hike. At this point, nothing but a surgery would fix it, so staying totally off of it wouldn’t repair it, and my hiking boots also held it enough that I wasn’t miserable. But running…running was out, because the real issue is the point of bending as the foot pushes off the ground in the running stride. Torn tendon made that nearly impossible. So I held on to my mental health by hiking as much as I could.

And that is the story of how I ended up needing a foot surgery. No big dramatic injury, no great story to tell. I just, you know. Sort of wore it out!

Up tomorrow, details about the surgery itself.

Oh ouch! I hope it improves!