Home Archives Profile Subscribe
Struggling to Fit the Pieces Together
Book Review: The Dictionary of Lost Words by Pip Williams

Book Review: Oona Out of Order

Oona stopped trusting the mirror years ago. After all it told only a sliver of the story. The mirror exposed time’s passage, yes, but eclipsed her heart’s true mileage. Each year the body was hers but her mind was out of sync with her reflection.

I’m going to say this upfront: this review is all over the place AND it includes spoilers. But as “all over the place” seems to go with a book that’s about a woman who leaps into different years each New Year’s Eve, I guess that works. I’ll warn about the spoilers! 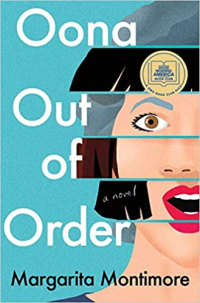 Oona Out of Order by Margarita Montimore tells the story of Oona, who for unknown reasons begins a sort of time traveling at midnight on her 19th birthday (which is on New Year’s Day). As the clock flips over, she faints and then awakens to discover her 19-year-old psyche in her 51-year-old body. She’s gone from the 80s to the 2010s and everything is different culturally and physically, but her self is still 19. Each section of the book is about a different year, as she continues “leaping” at the end of each one into random years.

I liked many things about this book and am glad I read it. I listened to the audio version, which was read by Brittany Pressley. I worried that the time-traveling aspect of the story would make the audio confusing, but each section begins by telling you Oona’s chronological age and the year she is leaping in to, so aside from the general confusion after the first leap, it wasn’t hard to follow at all. (I was confused, on the first leap, at why Oona didn’t know what was going on and then kind of dreaded her having to figure it out each leap but then I realized that’s not how it worked. She didn’t know what was going on because it was the first leap, duh!) Before her first leap, Oona is in a band with her boyfriend, and there are TONS of musical references scattered throughout the story, and I LOVED that aspect of it. There is also traveling, and a good amount of time spent in New York City, and Oona herself is a character I liked spending time with.

As I got closer to the end I started wondering how it might be wrapped up. The ah-ha for Oona is that she can’t really change what happens in her life (aside from making sure she buys and sells stocks at the right time) and instead she needs to embrace each year as it comes. Which is true for all of us, I think. And honestly, much as I enjoyed the book, the ending let me down just a little bit. It felt a little bit too…pat, I guess.

Still, the book made me think a lot, and that is what makes the best books for me! Some of my random thoughts:

What if I could have my 20-something body back, even just for a year? Would it change how I feel about my almost-50 body? I think 20-something Amy would feel the same abject horror over the softness and the wrinkles and the aches of this 50-year-old body as Oona does. As I am grappling with accepting this body, that first leap made me cry a bit. Aging is hard. What would 80-something Amy tell me to appreciate about my current body?

If I could experience time travel (it is the super power I would choose if they were being handed out!), what would I want to make sure I experienced? (Specifically…not changing big decisions but doing things I didn’t do, just for the experience of them.) I would go to Lilith Fair. I would start hiking earlier. (I would visit Big Springs before they capped it over.) I would spend my time with my newborn babies in entirely different ways. Care less about things that didn’t really matter, even though they seemed important then. Go on that last Lake Powell trip with my parents, even though Kendell didn’t want to go (go without him, even). I find myself adding to this list, a sort of mental tally of missed happy moments. This thought process has made me think OK, but what can I experience NOW anyway?

LITTLE SPOILER:
There is a scene near the end of the book when Oona’s mother, who is ill with cancer, has a good death-is-coming-soon conversation with her. (I wrote more about my response to this scene HERE.)  After I got up off the floor and stopped crying, I started thinking about what it is like to be the mom of adult children. What I can do to make our relationship stronger and more meaningful? One of the painful things for me about my kids growing up was that I had to learn I was no longer the most important person in their lives. This is natural and how it is supposed to go but it was still a loss I had to grieve over. And since I have a hard time feeling like I matter anyway, right now I feel very superfluous to all of my kids. (Less so with Kaleb, of course.) I think I need to find a better balance with this: not being the person who helps them the most in their lives doesn’t mean I don’t matter at all. (They haven’t made me feel this way, for the record.)

I began to suspect who Kenzie was during the first leap. Then I doubted because of the time they went to the Suzanne Vega concert together, but I didn’t put it away altogether. I wasn’t sure how it would work, and honestly I wish the book would’ve included one of the years Oona was pregnant with him. BUT. It pissed me off how often she castigated herself for putting him up for adoption. She uses the word “abandoned” several times as she processes the experience and I just: NO. Birthmothers and adoption are so misunderstood in our culture, and having yet one more voice of negativity about it in the ether just made me mad. I mean, sure, eventually she gets to a place of peace with it, but she never really stops feeling like she was a bad mom. Birthmothers aren’t bad moms.

Have you read Oona Out of Order? What did you think?