Home Archives Profile Subscribe
Book Review: Burning Roses by S. L. Huang
There Where You Have Landed, Stripped As You Are

“It was always a cruelty to promise them equality,” he said, “since by their nature they can never achieve it. We have already begun the merciful task of lowering their expectations." 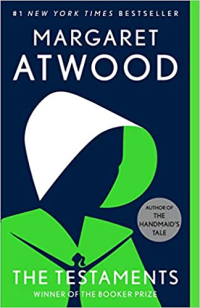 I have answered “The Handmaid’s Tale” to the question “what’s your favorite novel?” since the late 1990s. (It’s not really a true answer; in my heart of hearts I can’t pick just one favorite, but clarifying with “my favorite feminist/dystopia mashup is The Handmaid’s Tale” gets clunky.) I first read it in the summer of 1990, after I had discovered Margaret Atwood via Cat’s Eye. It was one of the first books I bought with my own money (I still own that copy, in fact; it is a BOTM edition that also includes Surfacing and Life before Man, which I haven’t ever actually read). “Nolite tes bastardes carborundorum” has been my motto ever since. In a sense, those two Atwood books I read in 1990 shaped the outcome of my life; in a way, they saved me. They gave me literature, gave me really good writing, as a reason to stay in this world when darkness had almost overcome me.

I don’t think I could claim The Handmaid’s Tale as my favorite novel, though, until I had read more widely and understood more clearly what the book does, how clearly it illustrates the ease of a society taking away women’s rights and how deeply ingrained sexism is. And then the way the ending sets the entire story on a different track.

I’ve read it seven or eight times. I wrote an essay about it while working on my undergrad and talked about it with some of my more widely-thinking English students when I was teaching. (One student came into my room once during my prep period and said “Mrs. Sorensen! I just finished a book I think you would love!” and it was The Handmaid’s Tale and yes…that was a good teaching day.) I lead a book group discussion about it at the library. And never once did I think “I really wish I knew what happened to Offred.”

What happened to Offred is so not the point of The Handmaid’s Tale. It isn’t a novel that works because of the plot, or only because of it. It is a novel that pushes you to ask yourself difficult questions, about yourself, about the people you have relationships with, and about society.

But apparently, that is just me, and Margaret Atwood has been getting requests like “what happened to Offred?” and “how does Gilead fall?” from readers ever since.

I was fairly disappointed that Atwood, one of my favorite writers, would write a sequel. But, here it is, along with a TV show (which, nope: I’ve never watched. Yes, it’s my favorite novel. No, I don’t need someone else interpreting it visually for me.) I did buy the book—I actually pre-ordered it—because it’s kind of a personal rule that I must buy every book she writes. But I didn’t even flip through it. Just stuck it on my shelf. Really: I didn’t need to know what happened to Offred (or June, as we’ve now learned her name is.)

But a few weeks ago, The Testaments was on the “available now” screen when I needed something to listen to at the start of a long walk. So I downloaded it and gave it a try. I went into it with zero expectations, without any of my usual Atwood fangirl emotion. Not even sure I would finish it.

I ended up finishing it.

I ended up liking it, even. (But not loving.) Did it change my life like The Handmaid’s Tale did? No. Do I think it is Atwood’s best novel? Absolutely not. Am I glad I read it? Yes.

I wrote before that The Handmaid’s Tale pushes you to ask difficult questions, and one of them for me is “why do women so easily turn on each other?” The regime of Gilead would not work without women’s complicity, especially the Aunts’. There is also that mean-girl structure we can so easily settle in to, with the Commander’s wives wielding whatever small powers they might have over the Marthas and especially over the handmaids. This isn’t just a thing that happens in novels, either; in my adult lifetime I have experienced several relationships with adult women who, in the end, I could only understand as Queen Bees protecting their regime. Women go to anti-abortion rallies. Women declare that we don’t need feminism. And I could write many pieces about how women hold themselves down by embracing the patriarchy within religion.

That is a question that The Testaments seeks to answer, as we get to read Aunt Lydia’s story. We come to understand how she got to be in the place of (relative) power she holds in Gilead and the machinations she undertakes to keep it. Her motivations aren’t mean-girl based. Instead, they are simply her doing what she needs to do to stay alive within a social structure that would be very happy to kill her. “What good is it,” Aunt Lydia thinks, “to throw yourself in front of a steamroller out of moral principles and then be crushed flat like a sock emptied of its foot?” Is it better, morally speaking, to be killed by refusing to conform or to say alive by shoving other women under the steamroller?

The story is told in three voices: Aunt Lydia, who is writing her experiences down in secret, as women obviously shouldn’t be writing anything, and the “witness testimonies” of two girls, Agnes and Daisy. Agnes is the daughter of a Commander, being raised in the tenants of the Gilead regime. Daisy is a young teenager living in Canada. These three stories eventually converge. Some of the questions from The Handmaid’s Tale are answered. You even get to read an ending that is similar, another conference discussing the study of Gilead.

In the end, I am glad I read The Testaments. I didn’t hate it. But it lacked that edge that Atwood’s other books have had. I wasn’t terrified within the society, as I was when I read Offred’s story. Maybe Gilead seen through the eyes of a teenage girl who doesn’t remember living a different way is less terrifying. At the same time, I was still full of anger and resentment over the usurpation of women’s rights. That narrow, self-righteous way of thinking, dressed in the guise of “preserving women’s virtue,” is not something I’ve only found in books, and it is my least-favorite way of being treated. So the book definitely made me feel something, and it does an excellent job reminding readers, all over again, that yes: we still need feminism. (Say it louder for the women in the back of the room.)

And we continue to need the kind of book that reminds of that. As Aunt Lydia says, “history does not repeat itself, it rhymes.” The Testaments is a rhyme of a book that didn’t need a repletion, really. But if she had to write it to fling more story to the clamoring masses, this one was OK. At least they got their answers.

And I am left asking myself if I can still say The Handmaid’s Tale is my favorite [feminist dystopian] novel. It is, but now I feel like I have to clarify: I felt that way before it was cool.