“I think,” Hoa says slowly, “that if you love someone, you don’t get to choose how they love you back.” So many layers of strata in that statement. … Some part of you is tired, finally, of the lonely, vengeful woman narrative. Maybe Nassun isn’t the only one you need a home for. And maybe not even you should try to change the world alone. 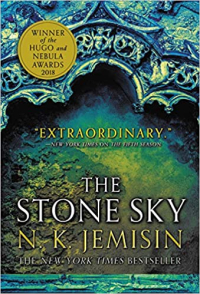 There are many different threads of meaning one could explore in The Stone Sky, N. K. Jemisin’s third book in her The Broken Earth trilogy. The persistence throughout time and seemingly all eternity of racism in human societies. Environmental issues. The way trauma continues to influence a person’s decisions. The way the whole third novel is sort of an expansion on Le Guin’s short story “The Ones Who Walked away from Omelas.” How science fiction reveals humanity in both its most awful and most holy forms. The writing style. The ways women cope in the world, no matter how strange said world grows, and how they don’t. What makes us human. The overwhelming difficulty but also the inevitability of figuring out who you are and how you need to be in the world as yourself.

But what stood out to me the most, though, was motherhood. Maybe because I see a small but very real connection between me and Essun. In a sense we are nothing alike, but we share the commonality of being middle-aged women trying to figure out their place in the world, and what drives Essun the most is finding and protecting her daughter Nassun.

One of the marginalia I wrote:

“The earth having consciousness: Of course it does. But why is it Father Earth instead of Mother Earth?”

In the book, the earth itself is waging a war against humanity, because of how humanity has distorted and destroyed the earth. It has a consciousness, an idea I can accept, but it is a male personality, full of vengeance, wrath, the need for retribution, a sort of coldness against its own creations. Undeniably, the earth is entitled to these negative feelings, because humanity has harmed it. Yet it comes for humanity with only rage and the impetus to destroy, with nothing propelling it to try to understand humanity anymore.

I know that isn’t necessarily “male,” know that women can also be driven by anger and vengeance. But to my mind, the absolute lack of any willingness to bend, to understand, to soften isn’t how, in general, women act. So, to answer my own question, it isn’t mother earth because the conscious part of the earth in the story is male.

What Essun brings to this millennia-old conflict is her motherhood. She is almost a foil to the “evil earth’s” anger, even though she herself is angry. In the end, what she wants is to protect her daughter, and she learns as she goes through the journey of the last book—there’s another thread, how this is a woman’s heroic journey (a story I have been looking for)—that she can also care for the other people in her life.

Is the whole story just an extended metaphor for learning that as a mother, in the end, what is needed most is for you to love your child for who they are? I wouldn’t take it that far because the story is so rich and complex and elegant and terrifying and detailed and layered and good.

But it did rip my guts out, especially my mother guts.

This is because right now I am in a season of transitions. My job is changing. I will soon be an empty-nester. I have long understood that “mom” isn’t my only role in life; in fact, I’ve never wanted motherhood to be my only role. But there is a difference between understanding this and living it. How do I draw meaning from life if I am not actively raising someone? Who am I then?

But to the very end, Essun is Nassun’s mother.

I am keeping my review fairly vague because this is a book to experience first and think about as you go, rather than knowing even an idea of what happens.

And I think I could write, oh, roughly four thousand words about how the series has impacted, changed, and bolstered me.

But what I want to remember most clearly, out of everything (even though I want to remember every bit of how it made me feel) is that it was Essun’s need to mother her child, even once she, in some ways, didn’t need her mother, is what saved the world.

It wasn’t called Mother Earth because Essun did that.

(This is book #9 of my Summer Reading Challenge.)