Book Review: The Bookshop of Second Chances by Jackie Fraser

But I've never thought about what it would be like if they were there all the time and...wondered what they'd think about all my favorite places. Or read things and thought I must speak to them about this, or wondered if they've read that. Or worried or been concerned because they're sad...and I want them to be happy. Wished they were with me when I have to go away.

I used to be in the habit of saying that I just needed some unknown relative—one who admires me from afar—to pass away and leave me $100,000. That's all I needed to be able to move. I stopped saying that when I actually started looking at housing prices and realized it would be closer to, oh...half a million dollars. From an unknown relative who loved me from afar.
But when I did say that often (it's a joke, by the way; I don't want anyone to die in the service of my beautiful house dream), Kendell asked me once why I said that. "That kind of thing doesn't happen in real life," he said.
Which is true, but it does happen in romance novels! 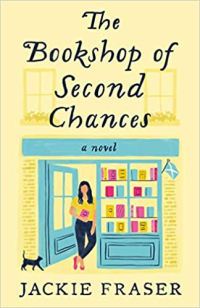 To fulfill my goal of at least once a year reading outside of my preferred genres, I read The Bookshop of Second Chances, which is based on a very similar scenario: a few weeks after she's discovered that her husband has been having an affair with one of her friends, Thea Mottrom finds out that her great uncle, who lives in Scotland, has left his house and antique book collection to her.
And despite my little joke, I had such a hard time suspending my disbelief to get on board with this book.
As far as romance novels go, this one was pretty good. It entertained me, even if  did have some objections. Thea travels to Scotland, where she discovers that being away from her husband helps her grieve and process the loss of her marriage. She makes friends in the small village that's close to the house her uncle left her, and gets a job at the local used bookshop. She meets Edward, who everyone in the village thinks is a grump but who she can just joke around with (he owns the bookshop).
As I read the book, I thought about how some books are about the reading experience, and that that is what reading is for some readers. People who love and only read mystery novels, or suspense novels, or westerns: that kind of experience is what some readers want, and that is OK. For me, the reading of a romance is about seeing which genre trope the story works with and how it deviates/stays true to it. This book has that rescued-by-the-death-of-someone-I-hardly-know trope. It's also kind of playing with the Pride-and-Prejudice idea of a man who everyone thinks is grumpy, distant, mean, or stand-offish actually being not too bad once you get to know him better.
All of which is fine. Not exactly what I want from a book, but fine.
But as the romance progresses, Thea's issues with Edward (namely, will he cheat on her based on his history of sleeping with his brother's wives/girlfriends?) just kind of...he says he won't. And then it's resolved, or maybe her concern goes away in the time that happens between the story we actually get to read. Just like...a conversation? That's all it took to resolve it?
OK.
Also, I would like to tell Thea that while she might find Edward's grumpiness kind of charming, it will grow old quickly. (From someone also married to a grump. I love him but damn sometimes the grumpiness is just too much.)
At any rate, I am likely not the best reader to give an objective review of The Bookshop of Second Chances. I can say that I didn't hate it, which is actually, now that I think about it, pretty high praise from a person who just doesn't really love reading about romance and other people's happy endings.
(Am I the curmudgeon in my own life???)
This is book #6 in my Summer Reading Challenge (and the review is numerically out of order because I forgot to post the draft!)