Book Review: The One Hundred Years of Lenni and Margot

Somewhere, out in the world, are the people who touched us, or loved us, or ran from us. In that way we live on. If you go to the places we have been, you might meet someone who passed us once in a corridor but forgot us before we were even gone. We are in the back of hundreds of people's photographs—moving, talking, blurring into the background of a picture two strangers have framed on their living room mantelpiece. And in that way, we will live on too. But it isn't enough. It isn't enough to have been a particle in the great extant of existence. I want, we want, more. We want for people to know us, to know our story, to know who we are and who we will be. And after we've gone, to know who we were. 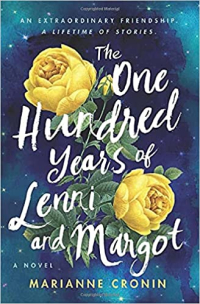 Books about authentic, healthy friendships between women (and by "authentic" I mean "friendships that aren't battered and bruised from too much mean-girling" even though I suppose that friendships based on mean-girl behavior are also real) are some of my favorites, and I think there just aren't enough good ones. The 100 Days of Lenni and Margot by Marianne Cronin is one of the good ones.

It tells the story of Lenni, who is a teenager living in a hospital wing for long-term and terminally-ill patients in England. Her voice is immediately engaging, sarcastic and wry and also full of self-protection and still wanting to be loved and cared for, even if she has terminal cancer. One day, she witnesses something very strange: an old woman, also a patient, who has climbed up onto a garbage can and is trying to fish out something. Lenni creates a scene so the other nurses don't notice the woman, giving her time to get what she needs out of the can (a letter whose origins and importance you will discover later in the story).

A few weeks later, Lenni attends the new art class the hospital offers and finds that same patient already drawing. They form a friendship; the other patient's name is Margot. Margot tells Lenni a story about her childhood in Glasgow, and then another, and as time passes and they attend more art classes, they realize that if you add up their ages, you get 100. They decide to paint pictures about each of their 100 years. So you get some of Lenni's history, some of Margot's, all of it mixed with their experiences in the hospital.

I adored this book.

Yes, it is about people in a hospital, many of whom are terminally ill. But it is also about sharing stories and how our stories can influence other people. Margot’s story is also about friendship, and marriage, and loss, and choice. It is a book with a bit of history. And art. (One of my favorite quotes: There are some words in the Lord's Prayer that I don't know. But I do know the wart art. It's a necessary inclusion, I think. We should all be artists. Especially if God is doing art in heave; we should follow his example.)  And astronomy. It examines faith and religion and all of the oldest questions—why do some people live and some die? It makes you wonder what sacrifices you are willing to let others make for you. It isn’t necessarily a happy story, but it is one that makes you feel hopeful.

[Sidenote: it also made me think about the differences between the US healthcare system and Great Britain’s. Margot and Lenni both are in the hospital for months, and before that Margot was in a place for elderly people who need a little assistance, and her husband goes to a memory care facility. None of that would happen in the United States unless they were very wealthy or very lucky to have amazing health insurance.]

But deep down, at its core, it’s simply a book about friendship. About how sometimes we find it when we are least expecting it. And how friendships sustain you just as much as romantic relationships. And how it doesn’t have to be bound by gender or age or race, but transcends those things.

I loved Lenni and Margot’s story and am so glad I read it. (Even if I did finish it at almost midnight bawling my eyes out in my hotel room.)

(This is book #13 in my summer reading challenge.)

Beautiful book. Definitely one of my favorite books of 2021.