Home Archives Profile Subscribe
Twenty Years Later, Maybe I Can Start Writing about 9-11
Book Review: The World that We Knew by Alice Hoffman

Love weighs less than fury—silver against lead on the chemical scale—but they might yet balance one day. 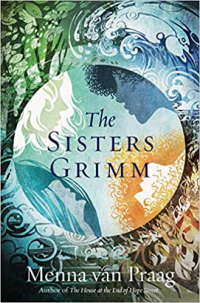 The hardest blog posts for me to write are about books I loved, adored, admired, and gave a bajillion starts to—and the ones that I would give only 1 star to. The latter is because I know there is a person behind the book, and because I know that all books are not for all readers and so maybe my negative response is not because of the book itself, but just because it’s not the book for me.

The Sisters Grimm by Menna van Praag seems like it should absolutely be a book for me. First, it came as a recommendation from my sister, who knows my reading tastes pretty well. Second, it’s a contemporary fairy-tell reimagining, one of my favorite sub-genres. Third, it’s about sisters. Fourth, it’s set in England. Fifth, England in October.

I should’ve totally loved this book.

The four sisters in question are Goldie, Bea, Liliyana, and Scarlett, each of whom are trying to figure out their lives as they approach their 18th birthdays. Each chapter is a day in October, from the 1st to the 31st, and each sister (half-sisters, technically; same father, different mothers) has a section in each chapter. The story starts with them each living their fairly-ordinary lives, beset by challenges, and then as October progresses they begin to have dreams and to meet people who start to make them question whether this is the only reality. Then there start to be chapters set in “Everwhere,” a place not of this world, where the four sisters went nightly as children. There, they each have a unique power or strength. They can no longer remember their experiences in Everwhere, but it is something that starts to fill their dreams. All of this is building to the day when they are each 18 (their birthdays are all on Halloween), when they will have a confrontation in Everwhere with their father and be forced to choose between lightness and darkness, good and evil.

I so wanted to love this book. If only to honor my sister’s recommendation. But, alas, I did not love it. I think it is a cool concept, but the execution just didn’t work for me. I couldn’t keep Liliyana and Bea separate and kept having to flip back and forth to pin down who was who. (It helped that Scarlet and Goldie both have hair that match their names.) It felt muddy and confusing, and much was left unanswered. (Like, what was even happening with Scarlett’s mom? How and when are the Grimm girls conceived? Why was Wilhem Grimm such an evil bastard? What happens to the Grimm girls who choose the dark?) It sets up a conflict between good and evil, but the way it ends is not as climactic as those clashing ideals might suggest. As each girl had a male love interest enter her life during the month, it felt forced in some situations (I did like Goldie and Leo’s relationship, at least initially, but then it devolves into the he’s-a-murdering-asshole-but-I-can’t-stop-loving-him trope and I just, yeah…no.) And the pacing was problematic, a very long drawn out October but then everything happens all at once on November first.

And then—the last page is a retelling of the Goldilocks fairy tale, but with a very different bear involved. It strives to be a piece that encourages women to be loud, to take up space, to be who they want to be, which is great, but it does so by sacrificing kindness and helping others. I think there is room for both and it’s a false dichotomy.

The writing itself was good, and there are some images that will stay with me, but overall, this wasn’t the book for me. I pushed myself to finish it simply because I’d put so much time into it.4

There is a sequel coming but I will not be reading it.

(This is book #11 in my summer reading challenge.)