Book Review: The World that We Knew by Alice Hoffman

That was how evil spoke. It made its own corrupt sense; it swore that the good were evil, and that evil had come to save mankind. It brought up ancient fears and scattered them on the street like pearls. To fight what was wicked, magic and faith were needed. This was what one must turn to when there was no other option. 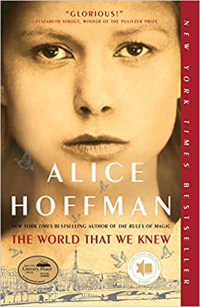 Since I first discovered the author Alice Hoffman, I have been smitten with her writing. She adds just a touch of magic to her realistic stories, just enough that they sparkle. No matter the topic, her books always give me a sense of hope. I had been wanting to read The World that We Knew since it came out, but hadn’t picked it up yet. Then, on my last day in Pittsburg, I had to run into a Target (the only store that sold books and was open early enough for the time that I had) because I had finished my other travel book the night before. There were several good paperbacks on the shelf, but I grabbed the Alice Hoffman one without hesitation. She is always reliable.

The World that We Knew begins with Hanni and her daughter Lea, living in Berlin in the spring of 1941. Hanni’s husband has died, and she has her mother, who is bed-bound, to take care of. They survive by Hanni’s thieving, until one night Lea is nearly raped by a soldier in the street. This helps Hanni know she must do something to get her daughter out of Berlin. Eventually she finds herself talking in hushed tones with the wife of a Jewish rabbi, who she has learned has the skill to make a golem. The wife refuses, but her oldest daughter, Ettie, who has listened at doors all of her life, knows how. She makes a bargain: in exchange for train tickets and new papers, she will make a golem to protect Lea. Of course this is forbidden work for women to do, but they do it anyway, along with Ettie’s sister Marta. The golem is a woman, who they name Ava, and here Lea’s story begins truly. She leaves Berlin and her mother and grandmother reluctantly, against her will, with Ava, Ettie, and Marta, headed for Paris.

As the story progresses, so do the war and the atrocities against Jewish people. Lea and Ava make temporary homes, again and again, as does Ettie, each of them impacted in different ways by the war. They each also begin forming relationships that will sustain them. Other characters enter the story, a farmer’s daughter, the sons of a Jewish mathematician, a village doctor. And always there is Ava, who Lea both loves and resents, keeping her safe but beginning to become more than the self she was created to be.

I think that all books about World War II should teach me something I didn’t know before, and this book did that. In France, the Jewish children were at first separated from their parents. The parents were sent to the camps, but the children were put into orphanages, many of them run by nuns. Eventually, of course, the Nazis overthrew those agreements as well, and took the children, but for a little while they were a bit safer.

I know that many people don’t enjoy novels about this time, but I am drawn to them. Especially stories that focus on women’s experiences in the war. Every time I read one that is well-written, though, I always have a hard time finding words to explain my reaction. I loved this novel—but how can you love a story that is about so much loss, pain, violence, and evil? But I did love it. The characters and the way their decisions and actions impacted other characters, often though they didn’t know it. The way that family stories and memories sustained them, even though they knew their family members had been killed. The examinations the story makes about women’s relationships and ways of creating and nurturing each other. The setting, small villages in the French countryside, forests out of fairy tales, the high peaks and winter snows of the Alps. The characters’ struggles and their sacrifices and courage, and Ava continuing to ask herself what makes someone human, what gives them a soul, what the worth of a life is. Also, the magical realism fits perfectly within the scope of the atrocities of the war, because I see it as a time that is very much like speculative fiction: suspension of disbelief is required.

One of the overarching themes of the novel is the idea that those we love stay near us after they are gone, a comforting thought for me, so that is what I will end with:

When she walked, Bobeshi walked with her. When she made her way through the forest, her mother was by her side. She had once heard the ancient story from the Torah of how Rachel heard her son’s grief when he came to her grave, for her love for him had never died. If you are loved, you never lose the person who loved you. You carry them with you all your life. They were with her as she ran.

(This is book #11 for my Summer Reading Challenge.)