Your Garden Always Loves You Back

From the window behind my laptop, I can see one of my big sycamore trees and two of my rosebushes. The sycamore has many dead branches that are just dangling, lodged or stuck against other living branches. After wind storms I examine the tree (from my perch behind my computer) to see which ones might’ve budged. There’s always one that gets blown out, but never all of them, and for six weeks I have itched to climb the tree and free them all. 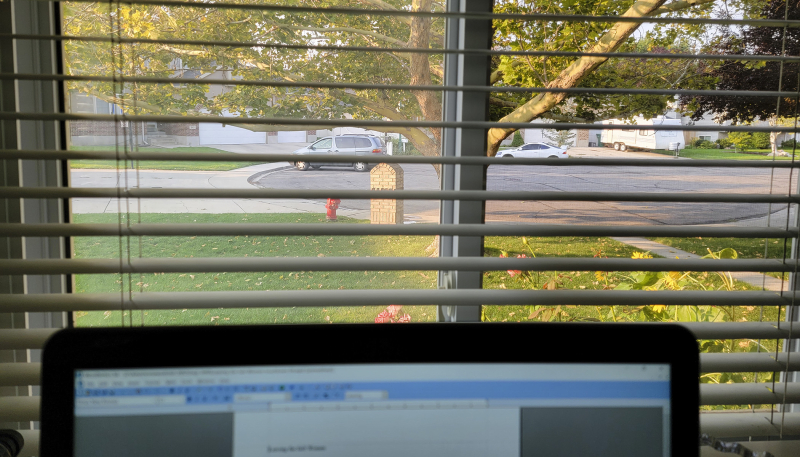 And the rosebushes! They were both given to me by my parents, and during my recuperation I’ve watched them go from blossoms to bare stem heads, a process that left them in all levels of flower: bud, bloom, faded petals, naked. I could only watch the progress and do nothing.

But yesterday—yesterday I got to work in my garden.

It was awkward. The walking boot is definitely better than crutches but it’s not me on my own two feet. I nearly tumbled over at least twelve times and I couldn’t reach everything I wanted to. I could feel that in my weeks of healing, my body has grown weak and tight; my back ached and my hamstrings protested a bit. I couldn’t use a shovel and I definitely could not climb the trees for errant branches.

But I pruned the rosebushes. I pulled weeds. I thinned out the cosmos which have taken over my front flower bed.

And I discovered that two pumpkins have grown! I planted pumpkin seeds in April, on a whim because they were displayed right next to the Coban at the farm store where I buy it. (Technically it’s tape for horses if you buy it at the farm store, I guess, but I don’t care. It’s four dollars cheaper there, so horse tape it is!) I’ve often thought about planting pumpkins but never actually done it.

When I told Kaleb what I was doing, he said “Mom, don’t get your hopes up. If any do grow, the neighborhood kids will steal them.” Such cynicism in my baby! But, to be safe, I planted some in the front bed (which is, yes, a temptingly accessible spot for a pumpkin to grow) and some in the east bed, which is behind our fence and so would require much more shenanigans for theft to happen.

I’d seen a few blossoms before my surgery, but the vines had grown too thick for me to see if any of them grew into pumpkins, unless I got down on my knees which I definitely couldn’t do with my crutches and splint and my other knee sore from my pre-surgery tumble.

So when I pushed back the leaves yesterday, I discovered this cute pumpkin: 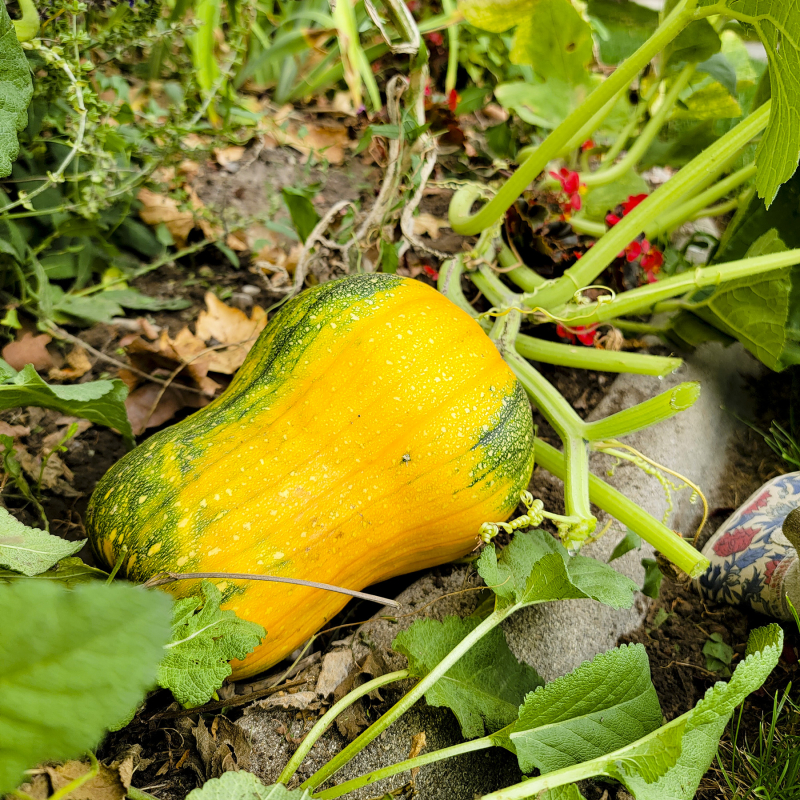 And then I made a sound like a little girl excited about her birthday cake because seeing that just—well, it just brought me this little, sweet spike of pure joy.

All the time I was in the house, looking at the world, looking at my little part of the world, it was still making progress. I couldn’t witness all of it, but it didn’t need me to. It kept growing all on its own. I was healing, my garden was growing. There is something rejuvenating and hopeful in that thought. It makes me feel less like this year has been a sort of wasteland I’ve wandered, getting chubbier and sadder. My garden still had flowers.

My garden grew a pumpkin.

Two, in fact; there’s also this perfectly round one in the east flower bed, safe from thieves: I’d only gone out there once during my recovery because crutches+grass=nope. It was a riot of color, the zinnias and sunflowers I planted in the spring at their full, beautiful peak, and that bright orange pumpkin!

I know not everyone loves gardening and the work it takes to have flowers. But I hope I can always have a little piece of earth for my own, partly because I enjoy nurturing it, partly because of how often it nurtures me right back.

It's hard to be patient with our body when it is in recovery.
Your squashes look so good :D

How beautiful! Finding joy in the simple pleasures of life is such a gift. As is gardening! I've never had much of a green thumb, but I have such appreciation for those who do.
Thank you for sharing your joy! Wishing you full healing!

Ooof I hate boots! I had to wear one over a year! Got so sick of it! But how wonderful to have successful PUMPKINS!!!!

godspeed on the recovery! i'm so excited for you and your little pumpkin patch!

I never appreciated having land, and ground to put my feet on, until I moved away from the bounty of home into the city. The pumpkins you've planted have grown fabulously and I hope they stay in your garden until YOU take them out :)