Book Review: In the Quick by Kate Hope Day 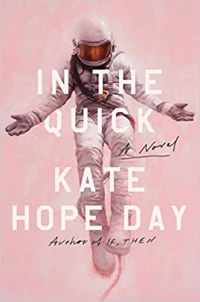 I finished a book yesterday on my lunch break that I am struggling to write about, In the Quick by Kate Hope Day. It is billed as a mashup of The Martian, Station Eleven, and Jane Eyre and I've wanted to read it since it first came out, so when I was scrolling for another audiobook to listen to while I was quilting this week, and it was available on Libby, I snagged it.

It tells the story of June, who lives with her aunt and uncle (we never find out what happened to her parents, which was a question that ate at me for the entire story), a wealthy family living in what I imagined as an enormous old manor house in England, updated with modern conveniences but with plenty of relics in the basement. Her uncle is an astrophysicist who has designed a fuel cell capable of taking astronauts on years-long space trips, but he dies before he sees the first ship launch. June has his same mechanical-mind way of thinking about things and is fascinated with how things fit together.

When she nearly burns her aunt's house down, she is sent to Peter Reed, a boarding school her uncle founded to teach students to become astronauts, and eventually she gets to go to space, to the very pink planet her uncle always told her about.

This is hard for me to write about because I had a huge variety of responses. I was absolutely pulled into the story and couldn't wait to know what happens to June and to the space ship, which has stopped responding. I loved her precocity and her connection to her uncle, and her quirkiness—which maybe is even on the autism spectrum. I loved the adventures I went on with her, and besides, I always love a good bildungsroman, a boarding-school setting, a plot that infuses a genre with feminism. Plus the writing is amazing, and I would like to visit the pink planet too.

I love that this reads as a literary sci-fi. Considering how lines between genres can be blurred is always interesting to me.

I wanted it to be more. The ending was deeply unsatisfying to me, even as I understand why it ended as it did, and I had so many unanswered questions. Not just about June's parents. But: where did the pink planet come from? How did we not know it existed after all this time? What was in the atmosphere that helped with pain? What was wrong with James? Why were the government restrictions so lax and lazy that they just let all of the technology and inventions get neglected?

I ended up reading a bunch of reviews after I finished it. (I tend to avoid other readers' reviews of books until I have finished them for myself.) The responses to this one are all over the place, from extreme loathing to "it was OK" to adoration. The general consensus though?

That cover is amazing.

Even with those unanswered questions, though, I am glad I read this one and imagine that I will continue thinking about it for a long time.