Book Review: Sisters of the Wolf by Patricia Miller-Schroeder

Before they leave, Shinoni, Keena, and Tewa walk to the back of the cafe for a moment alone. Shinoni takes out her precious red ochre and mixes it with water from her bag. Both girls prick their thumbs and mix drops of their blood into the pigment. Tewa cocks her head and watches as first Shioni, and then Keena, places a hand in the pigment and presses it onto the stone. They smile at the red handprints floating high on the rock wall.

Jean Auel's book The Clan of the Cave Bear, which I read when I was 14, was a formative novel for me. Yes, yes, all that sex in the later books of the series, and the disappointment of the last book (I actually only heard it was disappointing...I never actually read it because I read so many negative reviews of it), but that first book changed something in me. It made me look at the world in a different way, outside of the tameness of the suburbia I lived in, but it also connected to my affection for and curiosity about the natural world. Do I love hiking and being outside because of Ayla? Not entirely, but some part of that affection was sparked during those post-Christmas days in December of 1986 when I first read the book. 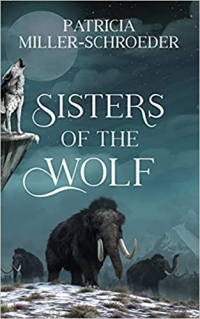 And now, I confess, I continue to have a weakness for books set in pre-historical times. That anyone could survive at all in those brutal conditions still amazes me, and it is the processes of survival that continue to fascinate. So when Sisters of the Wolf by Patricia Miller-Schroeder came across the fiction desk at the library, I snapped it up without hesitation.
It tells the story of Keena, who is a Neanderthal, and Shinoni, a Cro-Magnon, and their journey across the landscape of Northern Europe as they try to find Keena's home after a hunter, Haken, has shattered both their lives. Each girl tells part of the story, even after their plot lines have connected.
A difficult thing when working so far back into history is how to get the language right. Several times the way something was worded threw me out of the story, such as when Keena says she has her hands full with one of the toddlers she is watching. "Hands full" didn't seem like a way of thinking that a prehistoric person would follow. Likely this is simply a function of telling this kind of story, but it made it harder for me to stay involved. Likewise when the author tried to relay the barbaric yawps of the wild men...if I had been reading my own copy I would've written "these aren't Native Americans!" in the margin because that is what the cries translated as.
I confess I struggled a bit with Keena and Shinoni being rescued by a pack of wooly mammoths by riding on their backs. And the way that in the Cro-Magnon tribes women's roles are sharply restricted also pushed a button for me. Perhaps it's illogical but in my head people in prehistoric tribes would've needed everyone to help in the ways they could help the most; it seems like it is a matter of survival that there wouldn't be effort to spend on gender restrictions.
But I also really enjoyed this reading experience. The friendship that Keena and Shinoni form as their journey progresses—at first they are antagonistic as, not only are they strangers, they are different types of human beings—progresses naturally, and I loved seeing them share their different ways of being in the world with each other. (Shinoni teaches Keena about sewing and Keena teaches Shinoni how to play a flute made of a bone from a swan.) Shinoni's journey, especially, as she learns about painting with ochre on cave walls and pushes back against the restrictions of her culture, was something I enjoyed.
Was it fine literature? Nah. (Has there ever been a literary novel set in prehistoric times?) But that's OK. I had a great time being in this time period with Keena and Shinoni and am glad I read it.
(Even if it is yet another book that doesn't fit anywhere on the list for my Fall Reading Challenge!)