It was hammered home season after season that even though going out for a job can make you feel alive and whole and powerful, it also leaves you vulnerable and alone. But we keep running anyway. Because we have no other choice.
We run in spite of this. We run knowing the dangers, knowing who we are and why we could be targeted. But that won’t stop us. 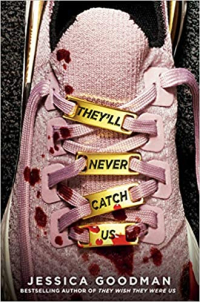 I confess: I kind of picked up this book mostly to meet one of the items in my autumn reading challenge: a contemporary YA novel. For complicated reasons, my affection for YA lit has dimmed some over the past two years; I’ve paid just enough attention to know what is trending so that I can continue doing good work at the library, but I haven’t stayed on top of reading all of the popular books. Or even the little-known ones. But a novel about a cross country running squad and sisterly dynamics?

Hard one for me to resist.

They’ll Never Catch Us by Jessica Goodman tells the story of the Steckler sisters, who are cross-country stars in Edgewater, the small town near the Catskills where they live. It’s an ominous place, as a series of unsolved murders targeting cross-country runners ten years ago still haunts the town. When the story starts, you know that oldest sister Stella did something horrible the year before, but not what; you also know that Ellie, her younger sister, had something traumatic happen over the summer. (Her “something” was not hard for me to guess, but what happened with Stella was more mysterious.) The sisters are both hoping to get scholarships and continue running in college, but Stella has already lost hope because of whatever she did, and Ellie isn’t quite as fast as her sisters. When a new girl, Mila, moves into their town, the stakes get even higher—and then she disappears.

I really enjoyed this book. Mostly importantly, it got the concept of running pretty correct. (I’ve read several novels about running that, well: did not get it right.) And the tension between two sisters who compete in the same sport. And small-town dynamics. And the travertine way the adolescent brain makes choices. It also captures the push and pull that women runners feel. I can’t tell you how many times someone has told me it’s not safe for me to run alone, because someone might attack or hurt me, but honestly I don’t particularly love always running with someone. Sometimes it’s OK, but I like being out on my own. And, frankly, I don’t have many real-life running friends anyway. So my choices are to run by myself or not at all. Society is happy to tell me to not run at all, rather than teaching men to not attack women, which is also a problem in Edgewater, too. (After Mila disappears, the mayor states that girls are forbidden from running alone, but it’s still fine for the boys since they’re not the ones being attacked.)

I’m not usually a huge mystery fan, but this one pulled me right in. I actually stayed up until 1:30 in the morning to finish it. I’m glad I picked it up and gladder that it reminded me that good YA is worth the time.