I am grateful for the walk to the goose pasture, the solitude. My grief is a quiet thing, wrapped so tightly around me that sometimes I cannot hear properly, my breath coming in strained gasps. Here in the fields it eases a little...There is a wordless sort of hope in this field that bears me up. 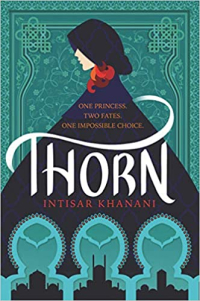 One of the perils of working in a library is that every day you risk coming upon a book that derails whatever else you're currently reading. This happened to me the other day, when I was happily ensconced in the beginning of the novel Matrix but, at work, picked up a copy of Thorn, a YA fantasy by Intisar Khanani, from a table where someone had left t. I read a few pages at the desk and got caught up in the story, so I took it home and finished it. (I will return to Matrix next.)
Thorn is a retelling of the Grimm fairy tale "Goose Girl," and part of me thinks that we don't really need another telling. Shannon Hale's Goose Girl is a book I have long admired (as well as the companion novels in her Books of Bayern series); I couldn't help but compare the two as I read, and I wondered if Khanani could add anything new.
The basic bones of the fairy tale stay the same in both books: the princess, traveling to an unknown country to be wed, is deceived by her attendant, who takes her place at court while she becomes a goose girl. In Khanani's story, the princess renames herself Thorn when she takes up her Goose Girl role; her betrothed prince, Kestrin, is secretly a Mage, and his family is being pursued by some type of unknown dark magic. Both stories have Falada, the talking horse, the threatening goose boy, the false princess tricked into choosing her own death. Thorn adds other characters and menaces, such as The Lady, a sorceress who puts a spell on Thorn, the snatchers, and a gang of thieves in the city. It is also much darker, concerning itself  with violence against women, social disparity, and the inability of justice to remedy real issues. As I am a connoisseur of dark and twisty, this wasn't troubling for me.
I read this book quickly, as I was eager to find out how it might end...and then some of the magic of the story failed for me. The confrontation with The Lady was anticlimactic after so much story energy was dedicated to her, and while I can see that the unfinished plot lines will likely be unravelled in the next book, I still left feeling unsatisfied. And—spoiler here!—Thorn discovering that Kestrin was the Wind and not an unknown small God was a little bit...well, it was a bit Edward-Cullenish somehow.
I also think the cover is odd. The design elements suggest something of a Middle-Eastern flavor, but this was definitely a European-based story.
All of that said, I did enjoy this and I will likely read the sequel, The Theft of Sunlight, because honestly: sometimes I do enjoy being in a European-based fairy-tale retelling with a bit of dark & twisty thrown in.
[This is book #2 of my Autumn Reading Challenge, which I am currently not doing very well with as I've lost myself to a quilting project]