When the policeman climbed back out of the dam he got up again and went on. He was no longer sure that there was a difference between them or that they were separate from each other and they moved on together across the surface of the world and the sun went down and it got dark and still they continued in duet. They moved through the night in faintest silhouette like dreams that the soil was having. 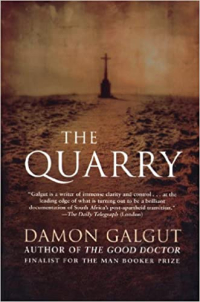 I'm one of those pretentious people who pays attention to literary awards. Or maybe I'm not pretentious, maybe I just am a librarian who likes to know what books people are talking about. Or maybe both.

At any rate, when I watched the video of Damon Galgut winning the Booker award a couple of weeks ago, I decided immediately I wanted to read something by him. The Booker introduced me to him—I hadn't ever heard of him before this year's nominations and I didn't pay much attention to his book The Promise, which won the award. But I read about him and then I decided I needed to read something he had written, and since my library had his novel The Quarry I decided to read that.
His work is described as "spare"—consider, for example, this description of sky: "clear smoke zigged across it like a thin fatal flaw in something otherwise perfect"—and that was what I kept coming back to as I read this story of an unnamed man who has committed some sort of crime and is fleeing across South Africa. He is picked up by a minister who is driving to his new congregation, a smarmy sort of man with questionable motives. The criminal kills him, disposes of his body, and drives to the small village, assuming the minister's life. Nothing is described in an effluvious way in this story; there are simply boulders and sunsets and a decrepit church. But the landscape still comes to vivid life: spare, but also precise.
This is a short novel, one you can read in a single afternoon if you want. It is violent and gritty, but it says something about human nature, how we are all fumbling along and sometimes that fumbling includes connection but often it leads to misunderstanding and violence.
I believe I will seek out more from this author