Book Review: The Silence of the Girls by Pat Barker

Looking back, it seemed to me I’d been trying to escape not just from the camp, but from Achilles’s story; and I’d failed. Because, make no mistake, this was his story—his anger, his grief, his story. I was angry, I was grieving, but somehow that didn’t matter. Here I was, again, waiting for Achilles to decide when it was time for bed, still trapped, still stuck inside his story, and yet with no real part to play in it. 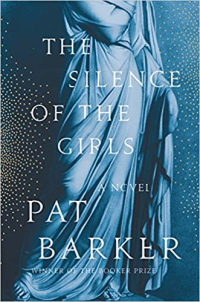 It is a long-established fact that I am a fan of retellings of the stories of Homer and Virgil. I actually read a retelling—Firebrand by Marion Zimmer Bradley—years before the originals. I didn’t read The Iliad, the Odyssey, or The Aeneid until my twenties, when I took one of several mythology courses while working on my English degree. (It is one of my greatest regrets that I cannot find the translations we read in that class—meaning, I don’t know who wrote the translations and I either lost or sold the actual book I read—because they were excellent.) I picked up this one, The Silence of the Girls, one day at work when I spotted it on a discard cart; I’ve been meaning to read it but somehow hadn’t yet. I read a bit of it at the desk and it immediately grabbed me, so I took it home and it was a great companion for the last days of 2021.

This retelling of The Iliad is told mostly through the perspective of Briseis, a princess in a kingdom near Troy who was captured when the Greeks sacked her city. She is given to Achilles as a war prize, and then taken back by Agamemnon when he quarrels with Achilles, leading him to stop fighting until the Trojans have almost beaten back the Greeks. When he kills Hector in a rage after his life-long friend, Patroclus, is killed fighting in his armor, Achilles receives Briseis back as a gift (again).

As I read this book, I found myself questioning myself. Why DO I want to revisit this story? It is a horrible one. An entire community destroyed, a decade of war; betrayal and deceit by the Gods they all believed in. Illness and death and, running through it all, the way that the lives of women are without meaning or value except in relation to men. “Men carve meaning into women’s faces,” Briseis comes to understand, “messages addressed to other men.” Ostensibly they go to war to bring back Helen, but it isn’t about Helen herself. Helen is just an excuse for men to kill each other, to plunder, to rape and murder and enslave women, and Helen is just the beginning. Iphigenia, Chryseis, Cassandra, Clytemnestra, Andromache, Hecuba, Penelope, Penthesilea, Lavinia, Circe, Calypso, Dido. Female characters are vastly outnumbered by male ones but their stories are consistent throughout, even when they are not murdered: objects to men.

Why do I come back to these stories?

“But it’s the girls I remember the most,” Breseis muses near the end of the story.

Me too. I’m not sure I’ve read any retellings that aren’t focused on the women’s stories. Even though their stories break my heart. Or maybe especially because they do. My reading changes nothing except it means they (and by “they” I mean the multitude of faceless, nameless women not in epic stories whose lives were used in the same or similar ways) are still at least thought of in contemporary times.

There is a section in this book where Briseis makes a list of the men and boys that Achilles kills in his furor over Patroclus’s death. I read this section with tears streaming down my face, because those boys also died for the same reason the women suffered: because men in power decided it was necessary.

And none of that has changed, really. Yes, the details look different. But even now, millennia since whatever real-life war that these writings are based on actually happened (if it even did), men in power continue making decisions that illustrate they value only themselves.

When I compare the person I was all those decades ago reading Cassandra’s story to who I am now, reading Briseis’s, I am certain the story is the same. What has changed is me, my outrage, my frustration, my continuing-to-develop sense that until women have actual, true equality, none of this will ever change. Which is maybe a bleak realization and perhaps not a hearty recommendation for Pat Barker’s novel, but in reality—no. It means she gets to the root of what these stories mean and why they continue to impact readers.