I had work to do, and as I saw the possibility of doing it recede into the brightening distance, I grew ever more afraid that I would lose myself—not in the way Kid had, but slowly, every day blanking out a piece of my heart and mind, until I faced some sheriff’s gun or executioner’s gallows with no fear or sorrow, because that which was worth protecting had already ebbed away.

I can’t say that I’m a huge fan of westerns. I do have a deep and abiding affection for Lonesome Dove and True Grit and stories about the American West, pioneers and cowboys and Native Americans and just that enduring myth of the freedom of the time (we just finished watching the TV show 1883 as another example). But I don’t love the conventions of the genre, the black-hat villain and the white-hat protagonist, the bad Indians and the good white settlers. Which is almost saying the same thing.

It’s easier to say that I like historical fiction set during the settling of the West. 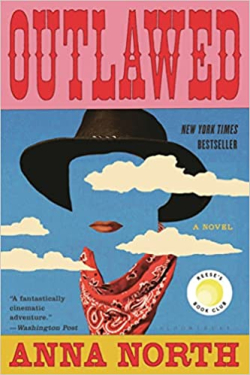 Anyway, what I am always drawn to are genre mashups, and I’ve been meaning to read Anna North’s novel Outlawed for a while now. And I finally picked it up after the enduring experience of librarianship: seeing a book on a discard cart and remembering you wanted to read it, so you pick it up during a slow moment and fall instantly into the story. Yep, this one’s coming home with me. (Even if you already have 27 other things checked out.)

The book is definitely not a traditional western, nor is it authentic historical fiction (based on all the things that actually might’ve happened). Instead, it is a feminist reinterpretation of the western genre. Ada lives in an America that was recently decimated by a plague. This has caused a shift in society, wherein fertility is highly prized. Indeed, if it seems you are infertile, you’re likely to be a witch and thus need executing (or at least being left to languish in a prison for the rest of your life). Ada’s mother is a midwife, so she’s grown up knowing about delivering babies, women’s bodies, and other medical issues. She never imagines she would be infertile, but to her surprise, she is.

Rather than live in a convent, and to escape the sheriff who is still searching for her to satisfy the community’s need to execute her, she flees West, to find the Hole in the Wall Gang, a notorious group of bandits lead by The Kid who steal and blow up trains and make all sorts of mischief.

I loved this book so much. It plays with the conventions of the western genre in such an amusing and educated way, and I loved how vividly the setting (Hole in the Wall is an actual place in Wyoming, which I now want to visit, that was the fabled hideout of Butch Cassidy and the Sundance Kid) comes to life.  But mostly I love Ada. She is intelligent and brave but she also makes a bunch of mistakes. Her pain over her marriage gets to be soothed in a surprising way. And the path she takes to discover herself, dusty and rocky and stumbling, felt authentic to me.