Happiness is tricky. Sometimes you have to fight for it. Sometimes, though—the best times—it sneaks up behind you, wraps an arm around your waist and pulls you close.

One of my favorite movies when I was a teenager was Girls Just Wanna Have Fun, a very 80s flick starring a pre-SITC Sarah Jessica Parker, about a Catholic school girl who sneaks out to dance with a boy so they can be in a competition together. (Actually it might’ve been my favorite movie, at least until Heathers came out.)

And I also loved Footloose quite a bit. 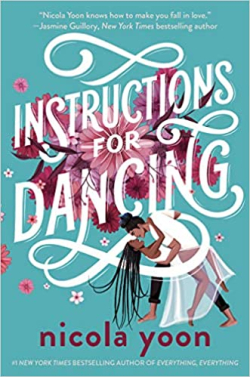 I thought of these two little affections of mine while reading Instructions for Dancing by Nicola Yoon, even though their only connection is “redemption through dancing.” (I actually want there to be more novels with the theme “dance redemption” but have yet to find any. Please send suggestions.) This YA novel tells the story of Evie Thomas who, as the story opens, is cleansing her book shelves of any and all romance novels, even though they are her favorite genre. This is because her dad cheated on her mom and thus broke all of her ideas about what love is.

When she leaves her books at a little free library she discovers, a woman hands her another book, Instructions for Dancing, and insists she take it. When she gets home, she realizes something has changed in her: When she sees someone kissing the person they love, she has a vision. She sees how the couple got together, a scene or two of their happiest moments, and how they will break up. It takes her awhile to figure out what’s going on, and the assistance of one of her best friends who assures her she’s not going crazy, she’s just been bewitched. Kind of like the character in the movie Big, she’s got this temporary magic power because she needs to figure something out.

So she takes a chance and goes to the dance studio whose address is in the book she got from the lady at the little free library (who she has since figured out was the one who bewitched—or maybe cursed—her). This is where her real adventures begin, and she gets convinced to learn how to ballroom dance so that she can enter a competition.

To dance with X, the very tall, handsome boy whose grandparents own the studio.

This is problematic because she has sworn off romantic love ever since her dad’s cheating. The visions have only made this worse as she now knows that all love eventually ends.

So then we go through all of the usual romance-novel things and the touched-by-magic things. Which makes it sounds like I’m mocking the book, which I’m mostly not. It lives up to its romance-novel ideals while also creating characters I really loved and rooted for. I mean, cynical, romance-novel-hating moi read this book in two days, so: yeah. Not too bad.

This book made me so mad!

First off because the responsibility for her dad’s choice somehow ends up becoming Evie’s. In the sense that for her family to move on and to heal, she has to do all of the forgiving. She has to carry the burden of his secrets to protect her sister. She doesn’t want to see him or spend any time with him, but he muscles his way back into her life anyway. She learns that the woman he cheated with (who he is marrying) went through some vague “really hard stuff,” as if that justifies the cheating. He kind of apologizes to her, admitting he probably shouldn’t have cheated, but all of the emotional work in the relationship is processed through Evie, rather than the adult who caused the heartache in the first place.

This might be my own anti-cheating prejudice. I know cheating happens, in romance novels and in real life. I know several readers who won’t read novels with cheating because they’re morally opposed. I am OK with reading books with cheating characters, but I usually struggle having compassion for the cheaters. So Evie’s dad’s sort-of apology just rang...not exactly false, but weak.

Eventually Evie kisses X with her eyes open, and she sees a vision about their future. Their romance won’t end with them breaking up because one of them gets bored or one of them cheats. Theirs will end when X dies.

And of course that’s the spin that allows for the break-up-then-get-back-together trope, because Evie realizes what she needed to learn. Namely, that yes, while all love eventually ends, what matters is what happens right now, in the midst of the relationship. Which is of course a great thing to learn.

But that she learned that X is going to die but then she doesn’t do anything to prevent it (like, even insisting on a complete physical check up?) made me finish the book with disgust. He doesn’t die in a totally unpreventable way—car crash, house fire, random shooting. Nope, he dies from a bad heart valve he’d had from birth that no one knew about. Which: if his valve was bad enough to kill him in eight months, it would’ve been bad enough for a doctor to hear it with a stethoscope.

It’s not often that I want to do physical violence upon a book, but when I finished this one I did. I wanted to throw it into a wall. Then I reminded myself that it’s just a story, a fantasy story at that. A romance, which is the height of unlikely anyway.

My response is at least testament that the author created characters I cared about. But the ending ruined the magic of the rest of it for me.