Book Review: The Unspoken Name by A. K. Larkwood

She became aware of a presence in her own mind. The touch of the Siren was quite unlike that of the Unspoken Name. This felt like a caress of warm water, rising slowly among smooth stones. Like the Unspoken Name she promised oblivion, but more softly. How sweet and soothing it would be to give way to her. Her voice curled around Csorwe like coils of vapour, gentle, ethereal. 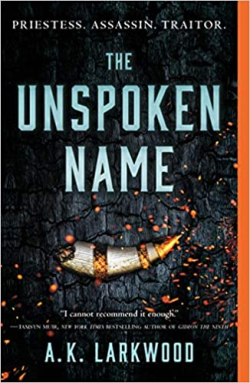 After reading two romance novels that fell flat for me, I decided to go back to a book I started in late December. I had enjoyed the first fifty pages but then gotten side tracked for unknown reasons. A good fantasy was exactly what I needed, I thought, to get back into a good reading groove.

The Unspoken Name by A. K. Larkwood is a high fantasy novel set in a universe composed of different worlds that are connected by gates one passes through via airships. This made me think a bit of Laini Taylor’s novels, but here the worlds and gates aren’t hidden or secret. Moving between the worlds involves going through a gate, then traveling through the Great Maze, a place I imagined as a gigantic landscape made of canyons in volcanic stone; one must know how to move through the maze to get to the next gate and thus to the next world.

Some of the worlds connected through the maze are dead or dying, but others are vibrant.

The story starts with Csorwe, who lives in a sort of convent. In her community, she is the chosen Child Bride; when she turns 14 she will be sacrificed to this world’s god. A few weeks before this is to happen, a traveler stops at the House of Silence and asks for a prophecy, which the Child Bride has the responsibility of giving. This man, Belthandros Sennethai, ultimately changes Csorwe’s life by offering her a choice: she can go into the cavern and be consumed by the god, or she can leave with him. She makes the latter choice, and the story takes off.

This was exactly what I needed: a book I loved falling right back inside of. Csorwe’s transformation starts with her choice to abandon the god she was pledged to, and works toward another sort of choice. I loved the layered worlds, the adventures Csorwe experiences, and the changes she makes as she grows. (I am keeping the summary purposefully vague as I think it is best, as with almost all fantasy novels, to just read it and discover the story as you go.)

While the book has the characteristics that make it fit within the high fantasy genre, it still felt fresh. I can’t say the worldbuilding is entirely unlike anything else. The Great Maze is similar to the Wood between the Worlds in Narnia, and Echentyr’s dead city reminded me of Charn. The influence of so many gods made me think of The Hundred Thousand Kingdoms by N. K. Jemisin, and there is a character who is killed when her body is transformed into different jewels (which happens in another of Jemisin’s works). There is that bit of a feel of Daughter of Smoke and Bone, and maybe The Ten Thousand Doors of January although the books were only published a year apart so maybe that is just coincidence.

But I didn’t have that “here I am, reading someone else’s take on Tolkein” feeling. Maybe because this is a high fantasy story that also includes libraries and one of the main characters is a librarian? Oranna (the librarian) is actually my favorite character in the book, perhaps because she is also an older woman. She is supposed to be the antagonist but I couldn’t read her that way—instead, she was just a person who refused to follow everyone else’s rules. (She must be in her forties.)

What I didn’t expect was that there is also romance in the story. It isn’t the focus, but is definitely one of the motivating factors. And after having been disappointed by those two romance novels I read earlier this year, once I realized that is where the story was going I got a little bit leary. But it was excellent (perhaps because it wasn’t the main focus), slow to build and never overly romantic romance.

While it wasn’t perfect (I think the conflict between Csorwe and Sennethai was not built up enough, for example, and Shuthmilli’s choices felt too abrupt) this was a good book to get me out of my slump. And: when I picked it up, I thought it was a stand alone, but turns out there is a sequel. A sequel that was released on the same day I finished The Unspoken Name. I’ve already requested the library to purchase it and am looking forward to going back into Csorwe’s layered world. (Hopefully with more Oranna.)