Home Archives Profile Subscribe
Book Note: A Spindle Splintered by Alix Harrow
Book Review: Between The World and Me by Ta-Nehisi Coates

I’ve heard it said that the Holocaust has no survivors, that even those who managed to remain technically alive were so irreparably damaged, that their spirit, their soul, the person that they were supposed to be, was gone forever. I’d like to think that’s not true. But if it is, then no one on Earth survived this war.

One of the cool things in my life right now is having an adult kid who likes to read (and has time to). My son Nathan and I have great conversations about books. I mean...I’ve always tried to talk to my kids about books and what they think about what they’re reading. Or to suggest things to them that I have loved. But it’s a different feeling when they’re adults and you don’t have to censor much, but can just talk about the issues. We recommend books to each other a lot, and it makes me happy! 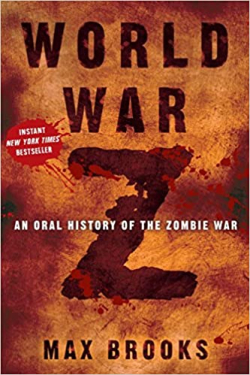 A few months ago he told me I had to listen to the audio version of World War Z by Max Brooks. It didn’t feel like holiday reading for me, though, and then I was just so stuck in the dark in the middle of winter that I couldn’t delve into a zombie war until spring had at least started to come our way. In fact, I started listening to it just a couple of days before Russia invaded Ukraine.

The audio of this is excellent. It has a whole cast, rather than just one reader. Nathan Fillion is one of the readers, which kind of made my day. (I love him.) The structure of the book is perfect for this kind of reading.

Listening to a novel about a war—even if it was with zombies—while an actual war was starting in the world was a strange feeling. (I was also reading a book about World War II, Still Life, and I actually had to set it aside for a bit because three wars happening in my head were just too much.)  It really drove home all of the ways that humanity is horrible to each other (both WWZ and the current war have vacuum bombs, for example), the way that we take so long to figure out this war that we’re in because we’re still fighting the last one. How leadership quite often moves too slowly.

But also sometimes gets it right.

Unlike the movie, the novel World War Z is told not in a straightforward narrative, but as an oral documentation, ten years or so after the fight against the zombies is mostly over. So it is a collection of people’s stories from across the world, told interview-style, of what they did and how they survived the battles. The stories that really stood out for me were these:

Father Sergei Ryzkhov, from Russia. He describes being a religious person in an atheist country, and his realization that the soldiers who were infected had to kill themselves was, in his mind, offensive to God. So he takes over the task, which becomes the act of Final Purification. Even just revisting this to write about it brings me to tears. It is so awful and so—noble isn’t quite the right word, but close. But then it devolves into assassinations in the name of purification and there it goes again: humanity’s consistent turning to inhumanity.

The burning of Kiev. Even if I hadn’t read this when Kiev was literally under attack, it would have stuck with me: the enormous statue Rodina Mat falling, “her cold, bright eyes looking down at us as we ran.”

Jesika Hendricks, from Wisconsin. She is a child who flees north when the infestation starts, with her parents who think it will only be a couple of months. The choices they have to make, and all that’s contained in something she says: “By Christmas Day there was plenty of food.” The will to survive no matter what, the struggle of being a refugee, the degradation of the natural world. So much of her story hit me hard.

Maria Zhuganova, also from Russia. She was already in the army when this started, and when her group refused to shoot someone who was infected—a rebellion of sorts—the Russian army instituted Decimation. They were divided into groups of ten and each group had to kill one of its members. The rest of her story, where she ends up after the war and what she does, is equally awful.

I just realized that half of the stories that really had an impact on me are Russian stories. And Ukraine isn’t Russia but on its borders. Is this because I read the book while Russia was invading? Maybe. In the book, many countries do horrible things. But that way of thinking…that, to me, is one of the masterful parts of the book. That he manages to get inside the thought processes of so many different nationalities, to show us both the differences and the similarities.

World War Z is one of those books that there isn’t a word for: a horrible, devastating story but so well written it must be called excellent. But how do you call “good” something that lays out so clearly the worst of humanity? Even if there are a few good moments.

So I just keep coming back to the quote I opened with, which really is what will stay with me from this book. The idea that wars actually never end, but continue feeding and influencing the next ones. True in fiction, true in real life (Putin claiming the war is to “denazify” Ukraine is him dragging the impact of what happened in World War II into the present day is only one example). If I have learned anything over the past half-decade it is that humans are less loving, kind, and good than I thought. From politics to health to very personal relationships, my faith in humanity has been broken, and this book confirmed those feelings.

And yet I am still glad I took Nathan up on his suggestion. I am glad I read this book, and glad for the timing of it. Not because it gave me hope, it didn’t. But because it helped me see that we all continue to be a part of this world, impacted by history as we make what will be history. It is a process we have always engaged in and maybe that is what it means to be human. Or at least a part of it.