Book Review: Braver Than You Think by Maggie Downs

Beyond that, I wonder if this is even my tragedy to understand. The struggle of my own mortality feels selfish in the face of those trying to reconcile their humanity, and I have no right to stake a claim in their personal suffering. I can’t escape the fact that I am a foreigner here, and I always will be. I can grieve here, but what right do I have to feel so sad? 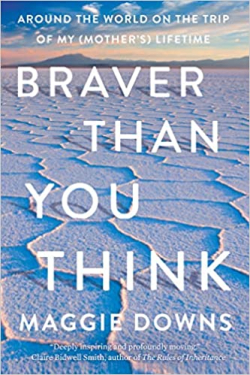 I think to some extent, reading is about recapturing the way a certain book made you feel. You read a book and love it, and then you want a different book that makes you feel the same feeling.

This is true for the book Braver than You Think: Around the World on the Trip of My (Mother’s) Lifetime by Maggie Downs. I read it because it is a book about a woman dealing with her parent’s Alzheimer’s, but mostly I read it because I loved Cheryl Strayed’s Wild: From Lost to Found on The Pacific Crest Trail and wanted to feel something similar. Something about how travel can transform you.

They are not the same book.

When Maggie Downs was little, her mom spent many hours with her, reading National Geographic and imaging the places she would visit. But she never had the opportunity; not long after her children were grown and out of the house, she developed early-onset Alzheimer’s.

So Maggie decides to take a year-long trip like the one her mother wanted to take.

She travels to many different parts of the earth, Africa to South America to Asia. This trip coincides with the first year of her marriage and the year her mother dies, so she is torn. Is she selfish to be traveling rather than spending time with her (dying) mother and her new husband?

But she continues on.

I enjoyed this book for many reasons. I learned a lot about different areas of the world (although very few of her experiences made me want to travel the way that she traveled). Since my dad died of dementia, I could relate to many of the struggles she tried to work through (although sometimes it felt like she was angry at her mom for her disease, as if she couldn’t remember her daughter anymore out of a spirit of malice). The loss of a parent is something I am still trying to come to grips with, so many of her responses helped me.

But I didn’t love it like I wanted to.

Partly because I had a hard time forgiving her for something she does on the Nile. One of her excursions is to white-water raft the headwaters of the Nile, and when she survives it, she drops her orange peel in the water, imagining it swirling all the way down to the Mediterranean, someone finding it and wondering about its origin. This kind of arrogance offends me: a river isn’t about your need to leave a mark on the world (but the orange peel probably could exist for that long, which is why you carry out what you bring in), and it illustrates that she and I don’t look at the world in the same way.

Mostly it’s because she writes like a reporter writes (which makes sense considering she is a reporter) rather than like a poet would (which is the kind of writing I respond to the most).

Even though it didn’t evoke the same response for me that Cheryl Strayed’s travel book did, I am glad I picked this one up. It sparked some new travel interests for me, and reminded me of a story in Paris that I still would like to turn into an essay, and reminded me that it is OK I am still grieving for both of my parents’ deaths. And other, newer losses in my life, honestly. “I’ve had to cultivate a certain amount of faith to continue moving through the world,” Maggie writes, and I have to nod my head. That’s a tidy summary of life as time moves forward. It takes more and more faith—not in God, necessarily. In yourself.