Home Archives Profile Subscribe
Ten Things I Loved about Being a Reference Librarian: A List
Book Review: The Last Graduate by Naomi Novik

She says it's too easy to call people evil instead of their choices and that lets people justify making evil choices. Because they convince themselves that it's okay because they're still good people overall inside their own heads. And yes, fine. But I think that after a certain number of evil choices, it's reasonable shorthand to decide that someone's an evil person who oughtn't have the chance to make any more choices. And the more power someone has, the less slack they ought to be given. 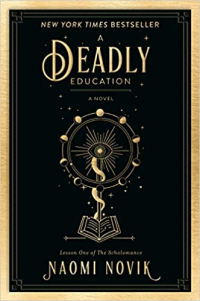 I’ve been anticipating Naomi Novik’s Scholomance trilogy since, oh…spring of 2020 I think. (Masks & hand sanitizer & nose swabs & terror & sweet, sweet anticipation of a favorite author’s upcoming release all combined!) I didn’t, at first, realize that it actually would be a trilogy, but once I did I reluctantly decided to wait a bit. I just get annoyed with starting unfinished trilogies and then having to wait and even eventually reread the first book so I understand the second and…

And thus I didn’t read A Deadly Education until last month, when I was lying around with stitches and an elevated foot (yes, again, sigh). Because then I could immediately start in on The Last Graduate and only have to wait until September for the third book, The Golden Enclaves.

This trilogy is set in a world where some people are wizards, and once they are old enough, they begin attracting the attention of evil, destructive beings, and so must be sent to school to learn how to fight the beings, control their power, and hone the use of mana, which is the energy that magic comes from.

El (short for Galadriel) has been prophesied to be a dark sorceress capable of destroying entire enclaves (the places where the wizards live). Her mother, however, is a benevolent witch who has taught her to examine things from different angles of morality, and so El is fighting hard against her own nature. She is cranky, difficult, and solitary, as she didn’t grow up in a wealthy enclave but in a small house with her mother in Wales.

At the Scholomance, the students can ask for spells from the nether that surrounds the building, and if they have enough power or energy, they receive them, but they are customized to each student’s magical strengths. So, for example, when El asks for a spell to light her room, which she receives is one for eternal flame (responsible for burning down the Library at Alexandria); everything the school (which is sentient to some extent and responsible for all of the actual teaching) does reinforces her potentially-evil nature.

The severely divided class structure complicates El’s problems, because—as  she’s not an enclaver—she doesn’t have an unlimited source of mana but must create and store it on her own.

She’s a loner just trying to survive a school full of creatures trying to kill her while she struggles to subdue her powerful nature.

When Orion Lake, the school’s hero, saves her from a Soul-Eater, the rest of the students start to think that they are dating, and slowly El gains some social capital. Friends, even. Which is good because the influx of evil creatures and terrifying monsters seems to be growing.

This book had a surprising spark for me. By principle, I avoid novels that focus on characters with wealthy families. Which maybe isn’t fair of me, but it’s just not something I enjoy, the escapes of the rich and powerful. I can relate much more to the underdog, the character who comes from a place of poverty, the unpopular one. The one who has to scrabble.

This book made me push back against that tendency. It made me wonder about myself—am I a reverse snob? Prejudiced automatically against the wealthy, unable to feel compassion or empathy for them because of my own bitterness?

El herself has to learn that the wealthy kids from enclaves, who come armed with literal vats of mana, spellbooks passed down through families, and instant allies—they aren’t completely selfish and uncaring (at least, not all of them).

She has used bitterness, meanness, and aloofness as shields, and when she starts to form relationships she has to figure out how to be more raw in the world. More vulnerable. Even with the wealthy enclave kids.

I’m not sure everyone will enjoy this book. The storytelling style is very interior, deeply within El’s perspective, and while she is so vividly drawn I feel like I’ve met her (maybe also because we share more than a few traits) she isn’t always a pleasant, fun lens to view the world through. It is heavier on description than dialogue and has a lot of inner monologues. None of which are negatives for me but I know not everyone will love that style.

Sometimes it’s easy to be disappointed by a favorite author’s newest offering, especially when you’ve prolonged for so long the turning of the first page.

But I was not disappointed. A Deadly Education was a perfect companion for a couple of recuperating-from-surgery days for me.