This month, one of my favorite library coworkers is retiring. I decided I needed to make a quilt for her as a retirement gift. I wanted it to be a sort of memento to represent all of her years at the library, personalized by as many coworkers as possible. At first I thought of gathering favorite quotes from coworkers about books, reading, libraries, friendship, memories. I imagined formatting them all in Photoshop and then having them printed on cotton and…it seemed that would be lovely but overwhelming, and coupled with the fact that this coincided with me transitioning to working full time and, yeah. I abandoned that idea.

Instead I started with this sketch: 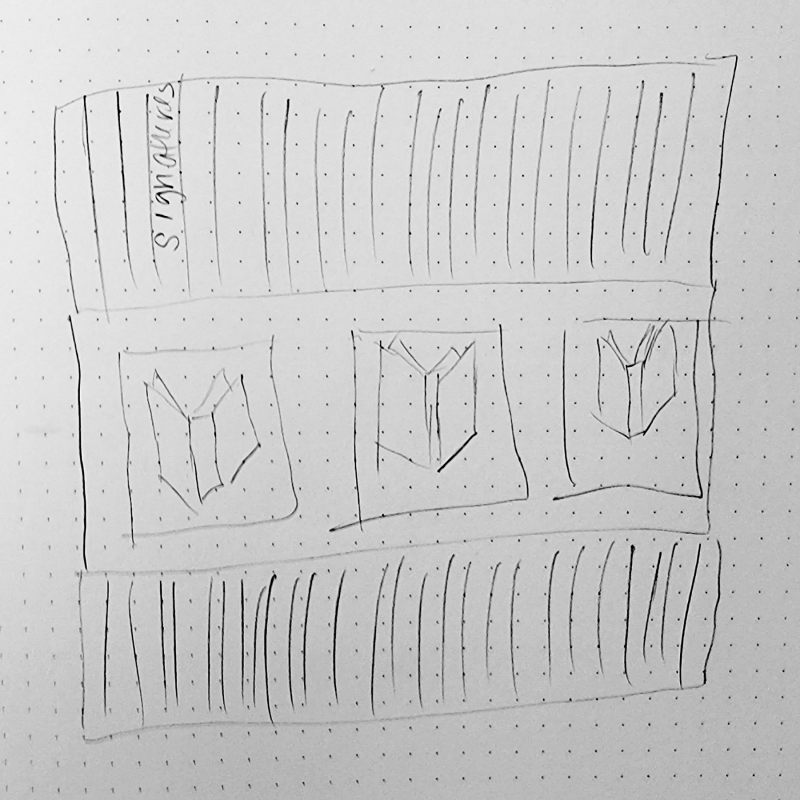 So, my basic idea was a center panel of books, with rows of book spines, some of them of printed fabric, some of them signed by coworkers.

And here's how it ended up turning out: 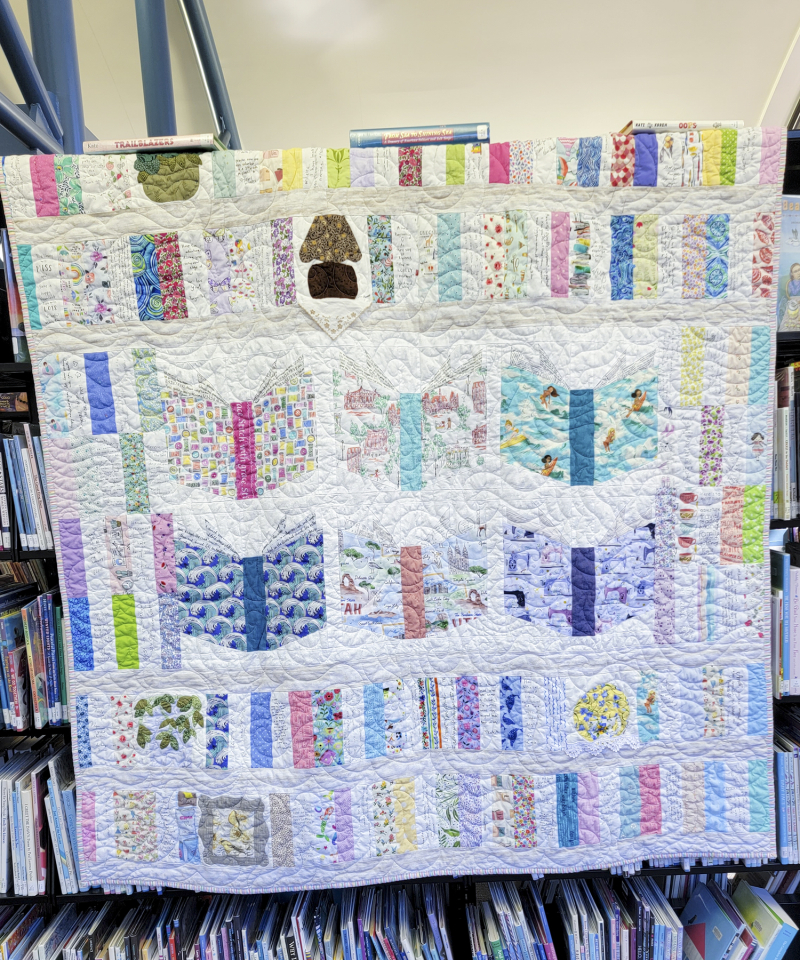 I cut a bunch of 7.5" x 2.5" strips. I was working with a vague idea of how it might all actually come together, so I estimated I would need 50 6"x7.5 squares, (2 printed strips surrounding one white one with the signature(s) of coworkers). I ended up needing way more, which I added to the sides of the center panel. I think I ended up with 75 signed strips.

I made the books in the center panel using the Book Nerd pattern from Angela Pingel.  It is a paper piecing pattern and these blocks were super fun to put together. I changed the pattern by enlarging it overall and then making the books wider. For these books, I tried to pick fabrics that both represented things my friend loves (the ocean, sewing, books, travel) and fit into the general scrappy-pastel color scheme. The fabric with images from Utah was a last-minute discovery from Joann and I was so happy to find it! (Even though I don’t, I confess, often use fabric from Joann, as the last time I did the result was a dye-bleed disaster.) I meant to make two rows of five books but the addition of the spines on the side meant I just had room for three.

When I finally got everything ready and put it together, I did have to take away some of the colored strips to have space for all of the signature strips. I was planning on the quilt being 60" wide but it ended up at 64" (ish), which is close enough. It took some scootching and some of the spines are trimmed down, but I think that’s OK because of course all book spines aren’t the same width.

One of my friends who also quilts, and who also used to work with us at the library, made the five appliqued squares: two plants, a lamp, a cup of tea, and a framed picture. That kind of square is NOT my forte so I was so happy to have her addition. I think they were the perfect finishing touch to bring everything together.

A few process tips for making a signature memory quilt:

I backed the quilt with this fabric. Isn’t it perfect!!! (Another confession, I might’ve made the whole quilt simply because I wanted to use THAT fabric for a friend who loves books as much as I do.) 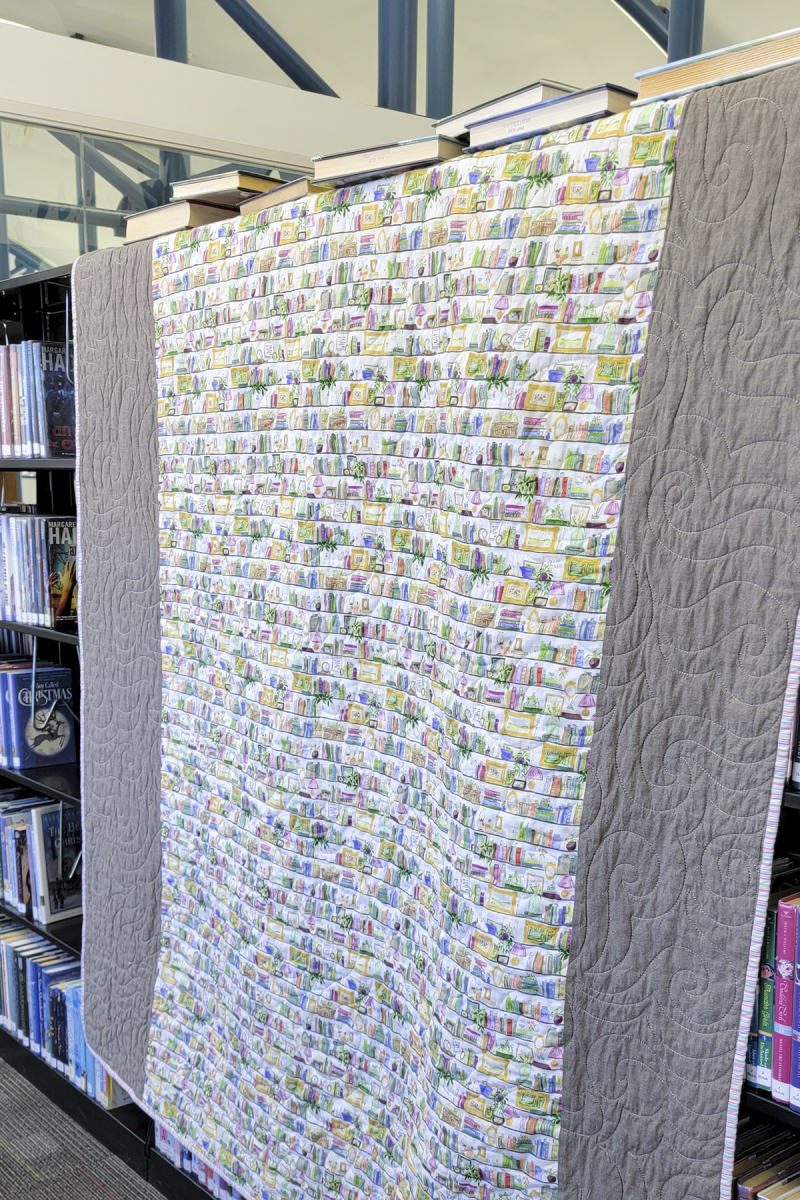 It’s called Book Shelves, by Caitlin Wallace Rowland/Dear Stella and of this writing it’s still available. I got mine at Hawthorne Fabrics.

The quilting was done by Sew Shabby quilting. I was worried about this part because I thought the words people had written would be covered by the quilting. She arranged it perfectly, though, so you could still read all of the words. She has a lovely wool batting so I had her use that. It’s light and fluffy and I love it!

This was the first time I’ve made a memory quilt like this. Some things I learned:

I got to give the quilt to my friend last Tuesday. I think she loved it and I hope it helps her remember how loved and valued she was at the library. And how much she will be missed.

(And, I have to say: I’m pretty proud of myself for getting an entire quilt finished while I was also working full time and recuperating from surgery. I can do difficult things!)

Beautiful quilt and congratulations on the new job!