Darkness gives way to morning's sunrise, winter ends, there are flowers, birds fly. Honour the goddess, remember the gods. We are children of earth and sky. 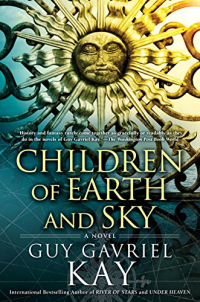 I’m not sure what to think of this novel, Children of Earth and Sky by Guy Gavriel Kay. It is a fantasy-ish novel based on Renaissance Europe, with a huge cast of characters. Several of the characters’ arcs involve trying to overthrow The Grand Khalif. There is art, sailing, adventure, battles, romance. (The first time I listened to one of Kay’s works, Tigana, I was listening while I drove to Disneyland with my sons and several times found myself glad I was listening on headphones. There is some spice in his books!) There are women who manage to overthrow the restrictions society and puts upon them. A soldier who finally finds his way home. Grand cities and beautiful countryside. My favorite scene was Leonora Valeri’s takedown of her father, but Danica Gradek finally finding a peaceful place (and the narrative of her impact down through generations) comes a close second.

I loved the book.

But I am also not sure I loved it.

Because as all of the conflict gets sort-of wrapped up, the individual story lines ended (in ways that were generally positive), it felt very…I don’t know. True-to-life, I guess, which is fantastic, but I wanted more of a novel-esque ending.

I think I had to mull it over for a few weeks before I could say what I felt about it. It is, at its heart, individual stories of people involved in their society’s larger conflicts. Sometimes their stories entwine in literal meetings and interactions; sometimes the characters feel the influence of others’ choices in ways they don’t ever understand. A lot like life, yes.

So, if you delve into this one—I listened to the audio and it is almost 20 hours long; the narration is by Simon Vance and is amazing—know that the end won’t be the wrap-it-all-up kind of end that most fantasies have. Even though you do find out what happens to all of the characters, none of the social conflicts are settled by their impact.

Which is really, I think, the point.