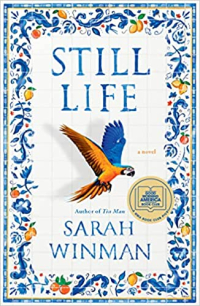 I read the novel Still Life very slowly and over about six weeks. Not because I wasn’t enjoying it—I was, immensely—but because of the style of the plot. It is a book that tells the story of a man’s life, with the smaller, everyday conflicts interacting with larger social issues over decades. Not the kind of novel you read for the conflict or the tension, but for the beauty of a life.

It tells the story of Ulysses Temper who, while serving in Italy during WWII, meets Evelyn Skinner, an art historian who is working to save Italy’s art masterpieces from the Germans. The encounter isn’t very long, only a couple of days, but it changes both their lives. They don’t meet again for at least twenty years, but their lives kind of revolve around each other. Ulysses goes back to London after the war, eventually is drawn back to Florence (where he met Evelyn) along with his found family. He survives the 1966 flood of the Arno (an actual historic flood that I knew nothing about), creates a business making globes like his father did, raises The Kid. Eventually he and Evelyn also reunite.

That’s kind of a summary of the whole book.

Which is why I was able to dip into and out of it at will. But I also read it slowly because I absolutely fell in love with the characters, and I was afraid that Sarah Winman would do what Kate Atkinson did in A God in Ruins (SPOILER): make it all a sort of dream-life that Ulysses didn’t get to live because he actually died in the war, not his captain.

But that wasn’t what she did at all. Instead, it was just…just an excellent novel about people making their lives the best they can.

Oh, and ideas about art.

And Florence (the city I most want to return to).

And food, of course. It can’t be Italy without food.

The mysteries in a life that life finally solves, but only very slowly. The way connections eventually reveal themselves, the inauspicious ways we don’t connect, the accidental times we do.

What love actually looks like. What a family does.

I loved this book so much. I think it will be my favorite book this year. And I’m actually glad I took so long to read it, picking up and finishing other books while actively reading this one, too. Because the slowness meant I got to spend more of my time in the world with Ulysses and Evelyn and The Kid and Claude.

And the writing is just lovely.

I usually start my book reviews with a quote. I couldn’t pick a single one from this book; there were so many beautiful things written. So I’ll end instead with a few of my favorites:

All this is a response, Ulysses. It’s not more complicated than that. Of course, we can then throw in execution of the craft—how well one paints—and the history of the piece, its provenance, and we can come up with value. But always the value for me will be response. How it moves one.

Book after book after book, the written patrimony of Western civilization. And sometimes through the mud, a glimmer of gold or a glimmer of blue stilled their breath. Made them humble, that shy glimpse of ancient holy. (As characters help clean up after the flood.)

Poetry, though, was sand. Ever compared to stars in its granular infinity. Ever shifting.

It’s what we’ve always done. Left a mark on a cave, or on a page. Showing who we are, sharing our view of the world, the life we’re made to bear. Our turmoil is revealed in those painted faces—sometimes tenderly, sometimes grotesquely, but art becomes a mirror. All the paradox, ours to interpret.

The world of the domestic kitchen is a female world. It is a world of routine, of body and of bodily function. A world of blood and carcass and guts and servitude. Men may enter but they do not work there and yet work is all that women do there.

It’s always been quite hard to know—to pinpoint, let’s say—where one’s unique story really begins. Does it really start at the moment of birth, or with those who came before? Instilling, distilling, in one’s veins the lived life, the unlived life, the regrets, the joys, as effortlessly, as dubiously one might say, as they hand down a certain walk (you to me), or a frown (you to me) or limp, mousy hair (Mother to me). If this is so, then my story starts with you.

Open up. Things happen here, if you let them. Wonderful things, Miss Skinner. When you least expect it. Are you ready, my dear, for things to happen? (Evelyn’s first experience at the Uffizi)

So, time heals. Mostly. Sometimes carelessly. And in unsuspecting moments, the pain catches and reminds one of all that’s been missing. The fulcrum of what might have been. But then it passes. Winter moves into spring and swallows return. Beauty does what is required. Loneliness becomes a mere Sunday.