Book Review: How to Be Eaten by Maria Adelmann 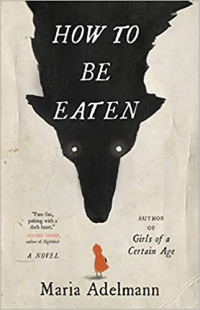 It doesn’t matter if they’re set in the same historical setting as the original tale or told in a contemporary setting. They can be set in space for all I care—there’s just something that works for me in a retelling. It connects me with the kid I used to be, who checked out the library’s copy of Grimm’s Fairy Tales so often the librarians noticed my affection and commented on it. Who’d sit somewhere comfy and lose herself in magical stories. But retellings also appeal to me because of who I am now, a person who understands more about stories, books, narrative structure, literary history. I love seeing what authors do with the foundational tale.

How to Be Eaten by Maria Adelmann tells the story of a support group for women who have experienced a trauma in a public setting. Those kinds of experiences that happen to people and the news gives them attention for a little while, but we never, as a news-consuming public, know the real truth of what happened, and we certainly don’t know about what happens after, when the traumatized people have to figure out how to live their lives. As we dig into their stories we discover that they are fairy-tale-esque: Blue Beard, Little Red Riding Hood, Rumpelstiltskin. Each chapter is told from the perspective of each of the five women, with interludes from the narrator, who is the therapist who organized the support group. (And who has some trauma of his own.)

While I was reading this book, I loved it. I enjoyed the way the women at first hated each other, but grew to understand each other as they heard their stories. I loved the premise of the support group, which is that telling your story in honest ways can help you process and heal. I especially liked Ruby and Raina. And the chorus of dead women, made into garish furniture, in Bernice’s story. They come to some insights together about what it means to be a woman in contemporary society that were just spot on.

But now that I’ve finished it and had some time to think, I’m kind of angry with it.

In the end, it’s a treatise about reality TV. Maybe that simply doesn’t work for me because it is not a genre of TV I enjoy. But it was more than that. The sum of the five women’s stories is less about how those whose traumas are publicized are damaged and more about how everyone is damaged, in some form or another, by contemporary society. Turning the focus away from that truth and toward the ills of reality television strips the story of its power.

I’m still glad I read it. I’m still thinking about it, which is the mark of an influential book. But I can’t say I loved it. I don’t think it fulfilled the potential it created.