Tova wonders sometimes if it’s better that way, to have one’s tragedies clustered together, to make good use of the existing rawness. Get it over with in one shot. Tova knew there was a bottom to those depths of despair. Once your soul was soaked though with grief, any more simply ran off, overflowed, the way maple syrup on Saturday-morning pancakes always cascaded onto the table whenever Erik was allowed to pour it himself. 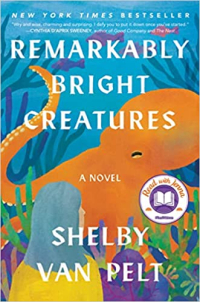 Remarkably Bright Creatures by Shelby Van Pelt is a novel about a lot of different things: loss of a child, grief, loss of a spouse, ageing, friendship, the way lives intersect, taking chances on new relationships, possessions and what to do with them when someone dies.

Oh, and an octopus.

It tells the story of Tova, a widow living in the Pacific Northwest who works nights at the local aquarium, cleaning the space. She’s friendly with all of the sea creatures, but especially Marcellus, the octopus. She lives alone, as her husband died a few years ago from cancer and Erik, their only son, died years ago as a teenager. She meets twice a month with her friends, who call themselves the Knit Wits. She’s mostly happy with her life, but when she receives word that her brother has passed away, she begins to grapple with her own mortality.

We also get the story of Cameron, an almost-30-year-old guy living in California. He struggles with holding a job and his friends are fed up with him, so when his roommate kicks up out after he can’t pay the rent, he decides to head out to the Seattle area on a tip that might lead him to his long-lost father.

And Marcellus, an extremely intelligent octopus who develops an affection for Tova and realizes he knows some of the answers about what happened to Erik.

I enjoyed this one quite a bit. It’s billed as a sort of A Man Called Ove remake, with a woman instead of a man, and while I see those connections it reads a bit differently. Tova isn’t as grumpy as Ove and the friendships are entirely different. But still with that “up lit” kind of feel.

I would say that I especially enjoyed Cameron’s story, as he gave me hope, but I really loved all of the characters’ story arcs. Especially Marcellus’s, as I have a deep affection for octupuses after reading The Soul of an Octopus by Sy Montgomery.

I’m glad I read it and would highly recommend it to anyone looking for a fun-but-not-fluffy, well-written-but-not-too-literary read.