It was strange, I reflected, as we went out into the golden evening of the Byzantine streets, that even in the weirdest circumstances, the most troubling episodes of one’s life, the greatest divides from home and familiarity, there were these moments of undeniable joy. 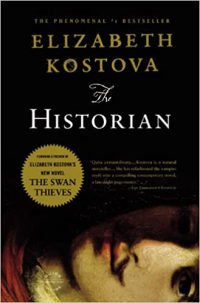 There’s a little accidental club at the library where I work: Those of us who’ve read and loved The Historian. In January I was talking to a new coworker and he mentioned it, out of the blue, thus joining the club. That conversation came to mind when Nathan asked me for a book recommendation, and a little while later he listened to the audio version and couldn’t stop raving about it. So I decided I’d listen to it, too. My hold took forever to come up for me, but I finally got it near the end of July.

The Historian by Elizabeth Kostova is about Vlad Tepes, the actual historical figure behind the vampire legend, and three historians who are trying to find and kill him. It is a layered telling, composed of one generation of historian’s letters, notes, and diaries being read by another one, who then in turn write their own letters, notes, and diaries. This is one thing I love about it, as it feels scholarly and relatable to me (a person who figures things out by writing about them). The historians in question are Bartholomew Rossi, his mentee Paul, and Paul’s daughter. They each find an old, small book embossed with the figure of a dragon, and after that discovery horrible things start to happen.

The hunt for Vlad traverses much of central and eastern Europe and, it turns out, time, as there is a group in Istanbul who has been protecting the city from vampires since Vlad’s supposed death. Much of the book happens in libraries and is a reflection of how books can transcend time.  (Which is why I think so many librarians I know love it.)

It was interesting to read this sixteen years after reading it the first time, in March of 2006. I’ve changed so much since I first read it. (I wasn’t even a librarian yet!) I’ve been to a few of the places mentioned in the novel. I’ve learned more about the world and about myself. But when I went back to read my original review (after finishing the audio) what made me laugh was that I wrote almost the same thing I thought upon this reading experience:

Awesome book right up to the end, which is absolutely anticlimactic.

And, yes, I suppose, one who will forgive a very long build up to a meh kind of end.