(If I had to choose on painting to symbolize that episode in my life, it would be a small table with a formica top pushed up against a wall and an enamel basin with a probe glowing on the surface. Slightly to the right—a hairbrush. I don’t believe there is a single museum in the world whose collections feature a work called The Abortionist’s Studio.) 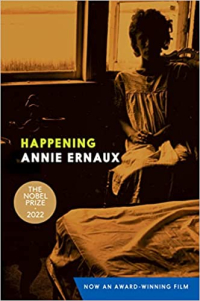 When I read about the French writer Annie Ernaux winning the Nobel Peace Prize for literature, I didn’t know anything about her work. She received the award “for the courage and clinical acuity with which she uncovers the roots, estrangements, and collective restraints of personal memory,” which resonates with me. I decided I needed to read something by her immediately, and chose Happening.

This book is a short memoir that details the back-alley abortion the author had in Paris in the 1960s, when abortion was still illegal. It relates the details of the abortion very clearly (which was hard to read) and in doing so brings to vivid understanding the reasoning for why abortion needs to remain safe and legal.

Ursula K. Le Guin (another of my favorite writers) has an essay about the abortion she had when she was at college. (It is called "What it Was Like" and is in her collection Words are My Matter.) She writes about how that abortion made it possible for the rest of her life to happen; without it, she would’ve had to leave school and abandon her ambitions. She never would have written the works that she did, nor met her husband—and thus never had the children she did have.

I thought about that a lot as I read this book. Ernaux doesn’t say the same thing, but the concept is hinted at. My mind crowded with the arguments of the pro-birth movement, which would say that the consequences of unprotected sex are the woman’s fault; she shouldn’t have had sex, she should have been more careful. The altering of her life matters less, they would argue, than the survival of the fetus’s life. (Except they would say “baby,” not fetus.)

Or, of course, the suggestion: “She should just place the baby for adoption.” So much hinges on that word, just. The simplicity it suggests. The lack of difficulty, the allusion to an easy way out. Adoption is easy and simple for literally no one.

What this book reminded me of, over and over, was just this fact: there is no easy solution to an unplanned pregnancy. Every choice is difficult. And a woman who has decided that an abortion is the choice she needs to make? That woman should be able to have that procedure. Her life—her real, breathing, existing life—matters, and if she does not want or is not able to alter it by becoming a mother, that is a valid choice.

But, as the book details, it is not an easy one. Ernaux, like many other women, nearly died because she didn’t have access to the medical care she needed. It was horrible and bloody and painful.

And, as the Nobel Prize committee suggests, Ernaux writes it with such stripped-down language. She writes this story not as a quest for pity or as a dramatization of a horrible experience. She writes it, instead, as a sort of experiment with memory and with language itself. How can you write about the complicated experiences you had years ago, make them feel real to the reader in the sense of how it actually felt to her, what she saw and smelled and experienced, without manipulating the reader’s emotions? She revisits the places she went to; she rereads her journals and appointment books from that time.

I walked along the city streets, she writes, my body harboring the secret of that night of January 20-21 as something sacred. I couldn’t decide whether I had reached the outer fringes of horror or beauty. I felt proud. A feeling not unlike that experienced by lone sailors, drug addicts or thieves, who have ventured where others fear to tread. A feeling that may partly have contributed to my writing this book.

I have finished putting into words what I consider to be an extreme human experience, bearing on life and death, time, law, ethics and taboo—an experience that sweeps through the body.

I have rid myself of the only feeling of guilt in connection with this event: the fact that it had happened to me and I had done nothing about it. A sort of discarded present. Among all the social and psychological reasons that may account for my past, of one I am certain: these things happened to me so that I might recount them. Maybe the true purpose of my life is for my body, my sensations and my thoughts to become writing, in other words, something intelligible and universal, causing my existence to merge into the lives and heads of other people.

I learned as much about writing, in other words, from reading this book as I did about abortions in Paris in the 1960s.

And I begin to understand why she won, and to think I will seek out more of her work.