The tragedy of death was distance. Death cleaved the world in two, leaving the living and the dead standing on either side of some impassable chasm. 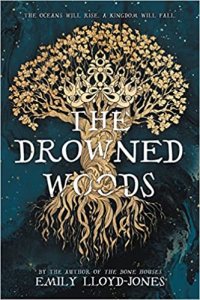 Set in a fantastical version of ancient Wales, The Drowned Woods by Emily Lloyd-Jones tells the story of Mererid, the last water diviner. She is living on the run, having escaped from the prince who branded her, after she realized he was using her as a weapon: he had her find the sources of the wells in a community, and then he would poison them.

When Renfrew, the spymaster from the prince’s court who trained her, finds her working at a tavern, he offers her a chance to gain some of the prince’s power by stealing some of his treasure. Along the way, they meet Fane, who is an iron fetch in the control of the fey, Ivanna who is the princess of the guild of thieves, and several other characters. The story weaves into the old Welsh legends but doesn’t feel like a retelling, per se.

I listened to this during the week of Thanksgiving and it was the perfect companion during trail runs, gardening, and all of my cooking. The narrator has a European accent that went perfectly with the story. I haven’t read any of Emily Lloyd-Jones’s other books but I am glad to have discovered her work. The Bone Houses is set in the same world as this one, so I will try it next.