She is doing this: she is about to do it. She does not want to but she sees no other path open to her. If she doesn’t do it, someone else will, and she will not let anyone cut the hair from her head. If it must happen, she will take charge of it herself. It is her hair. It is her head. They can take away her pictures and her paints; they can fill her body with medicines and cold foods and other things besides; they can poke and palpate her stomach and peer down her throat; they can lock her up in her rooms, but she will cut the hair from her own head before she lets anyone else near her with shears. 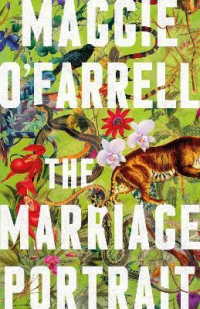 At this point I will read anything Maggie O’Farrell writes. (Not just read it but buy it.) One of the reviews I read of The Marriage Portrait panned the book because the reviewer thought it was overwritten—that she never just writes something one way, but always three.

I think that is one of the reasons to read Maggie O’Farrell’s work; I don’t find them overwritten but immersive. They are lush and detailed and the setting comes to life along with the characters. And the stories always strike me; they resonate with my reading personality.

So I definitely bought my own copy of The Marriage Portrait (I got the British copy because I liked the cover better). Set in Italy when it was ruled by the Medici family, it is a very meta book: “My Last Duchess” is a poem by Robert Browning about a painting of Lucrezia di Medici, a real woman of the time; the novel is a story about the woman and the painting and the themes in the poem.

But even if you’ve never read Browning’s poem or know the painting it describes or even are familiar with this time period, the book is excellent.

When her oldest sister dies before her wedding, Lucrezia is betrothed to the Duke of Ferrara in her stead. Lucrezia has grown up as a very different sort of child than her siblings. She is fearless; she wants to know why things happen. And she loves art. She has no desire for marriage but of course at that time she had no choice. The story is told in flashbacks to her growing-up years and her current situation: she is in a secluded hunting lodge in the Tuscan forests with her husband, who intends on killing her.

There is much I could say about this book. The images that might stay with me: Lucrezia and the tiger; Lucrezia cutting her hair; her crossing the mountains to get to her husband’s castello after their wedding. The descriptions of her art process.

But what struck me the strongest was the absolute entrapment Lucrezia faced. The fact that her life wasn't actually her life; she existed as collateral, as a political piece to move for power and wealth. And, of course, a womb: the danger in her marriage grows and grows as she continues not getting pregnant. She was a 14-year-old girl (barely) married to a man in his late twenties. That is child molestation and rape no matter how you look at it, but it was just normal then. The scene where her wedding night is described absolutely gutted me, especially as, once it is over, she thinks “at least I’ve done it and won’t have to do it again.”

This is one of my favorite books I’ve read this year.