A Choice that Bolsters All of Us: My Thoughts on Simone Biles and The Tokyo Olympics Team Gymnastics Competition

During my last season of gymnastics (four months of meets and intense training for those meets, stretching from January to my birthday in April, 1987), my closest teammate had a mental block. Her beam routine included a front flip, and for whatever reason, she became afraid of doing it. As I had my own block (the round off on my beam dismount) I had all sorts of empathy for her. As meets grew closer she would grow more and more anxious, but she always showed up to the meets and almost always nailed that front flip. But then, once in practice, she fell and injured her shin. She got x-rayed and since there was no break, she got taped up and kept going. That’s what gymnasts do. 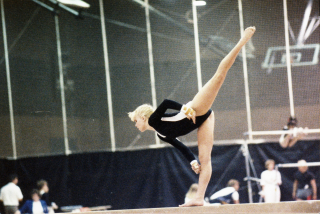 But as the qualifying meet grew closer, she struggled more. Then, at the start of one of our workouts during the week before the meet, the beam coach gathered us all to sit on the floor. She had this teammate stand in front of us, and told us what she’d done. At school a few days before, she’d walked through the halls, asking boys to kick her on her injured shin. Our coach didn’t explain why she might’ve done this, but she did say it was a disgusting thing to do; if she ever heard of anyone else doing such a thing they were now warned that they would be kicked out. This teammate was only being allowed to stay because no one had ever expressly had to say “don’t try to make your injury worse by having others hurt you.”

My teammate sat down next to me and I put my arm around her shoulder, but we could both hear the other gymnasts whispering. “Weird” and “creepy” and “gross” and “what’s wrong with her?” But as I had already also discovered self-harm, I didn’t have that response. Mostly I was grateful to know that I wasn’t the only one who was weird and gross in the same way.

The season continued, my teammate’s shin stayed taped, I never did get over my fear of my round off dismount. It was one of the reasons I got second in the all-around on my life’s last meet, instead of first like I was supposed to. Like real winners do. I did win first on bars, which was my favorite and best event, so I was OK because my beam coach was already disappointed in me, but my bars coach still had some respect.

After that meet, my teammate and I both left gymnastics. You’d think we’d stay friends, but somehow we didn’t. (I have searched for her on social media more than once and haven’t found her. I’ve also changed some of the details of her story, just in case.)

Because here’s the thing: gymnastics is a complicated sport. It’s not just about back handsprings and front flips, Yurchenkos and Tkatchevs, wolf turns and triple pirouettes. It requires an enormous amount of mental energy to get your body to do things normal people would never try. You have to conquer rational fear and then train your body to work towards defying gravity for a few seconds, twisting or flipping all the while. With pointed toes and smile.

It is also politics: not everyone gets the same level of attention from coaches.

Who had the most expensive leotards. Whose parents put the most money into the booster club. Whose enormous cabin could be used for team retreats. Who the coaches like the best and think have the most potential (usually the ones with the richest parents). Who’s been loyal to the club for the longest. Who is most likely to do great things like become Elite or get a college scholarship or make it to Nationals. Who is willing to try anything, doesn’t express fear, does everything the coaches tell her to do.

Despite that, it’s also the deep connections you make with your teammates. The way you know the history of their injuries and how to tape them if a coach isn’t around. You know your teammates’ floor routines as well as they do. You cheer for them even knowing it means their win is your loss, because it also means their success is a win for the team.

I loved my decade in gymnastics. I learned skills that I still use today: perseverance, toughing it out, encouraging others, bravery. A sense of my body within the world and a sort of confidence that still helps me keep my head up. How to tape a sprained ankle and how to care for a deep bloody blister. A precise cartwheel.

But I also carry some pretty good scars. Self-doubt. Despair over every ripple and lump and extra pound on my body. Guilt that my parents paid so much for my gym time and then I didn’t get a scholarship like my mom so desperately wanted me to. A bone-deep shame. The ever-present feeling that I was destined for greatness but I didn’t get it because I was a coward, even while I’m the first to acknowledge that I was never going to be an Olympian or even an Elite. I was a mediocre gymnast who never conquered her dismount fear; I was the support staff whose time, fees, and body supported the real winners.

All of those feelings, positive and negative, are still here in my body.

So when I watch gymnastics, I always cry. My body remembers exactly how it felt to move in some of those ways. I wish I could still move in those ways, could still be lithe and strong and graceful. My psyche remembers the negatives, the bloody hands and wrists, the shame of not being great like those girls on TV are.

But I’ve never cried like I did last night, watching the Tokyo Olympics team round and Simone Biles walking off the floor.

Kendell walked in and caught me crying and asked me why. I couldn’t explain for a bit because the lump in my throat was so large.

After her vault, when she is talking in that rushed way with her teammates, Simone says “I don’t trust myself.”

That was when I started crying.

Simone Biles does some amazing gymnastics. She is strong, talented, and skilled, but no matter what it still takes bravery to do what she does.

Unless you have been a gymnast, it is hard to understand how brave she was to do what she did at the team competition.

All of those entwining emotions that go into gymnastics. The idea that your body must be sacrificed on the altar of gold medals. The way your coach can humiliate you by simply seeing you make a mistake you shouldn’t have. The way you both support and lean upon your teammates. Not to mention the fierce public eye, which must feel like it is always on her.

As a gymnast, you do your routines and your moves, you compete because at one point you loved this sport. It was fun and it brought you bliss, learning how to flip and spin without getting (too) injured. Defying gravity without a space suit. Dancing across the floor in a sparkly leo. That joy stays with you, but it isn’t always there. For coaches, for gymnastics clubs, it’s still a business. It’s still and always about winning, the work of winning, not about the joy of moving your body. It’s not completely or even mostly about you as a person or as an athlete, but about you as a winner. You are really, simply grist.

So there is Simone, at the Olympics. The Olympics team competition. There she is, and she is struggling. In an invisible way, in a way you can’t tape or stitch together, a way you can’t shake off. In her head. In her gymnastics self, which knows how to do the things she does with her body, she cannot make that connection.

Everyone knows the stories. Everyone thinks of Kerri Strugg doing her second vault despite her ankle injuries. Gymnasts just go on, anyway.

By withdrawing from the competition, Simone Biles did something so mind-blowingly brave. So brave.

By walking away, she said that she would not risk her body for anyone. Not for her teammates, who I know she loves. Not for her country, who loves her. Not for her coaches, who helped her get to that point. Not for that gold medal. Not for fame or adulation or endorsements.

Because her mental game was not there, she knew she was risking her body if she continued. And she was brave enough to break the gymnastics rule that says “you must always risk your body.”

That was why I cried while I watched it. Because I know how much courage that took. And because I know most of the world will not understand it, and will say awful things about her.

Because taking care of your own body as a gymnast is only supposed to be something you do to become a winner, not to not compete.

Many people will write about what happened in gymnastics during this Olympics. My contribution to this discussion is miniscule. But all night, I couldn’t sleep. I was full of…something. Both dread and awe. The memory of my teammate’s bruised shin. When I slept I dreamed round offs turning into cartwheels, over and over.

But I am still adding this little bit. My voice to this conversation, because something shifted in me, watching her last night. Honestly, she’s never been my favorite gymnast (no one will ever replace Julianne McNamara for that spot in my heart), but that doesn’t matter. Last night, her bravery gave me just a tiny bit of grace for myself. For that part of me who is still 15, still facing down that dismount with my taped-up ankle and tiger claws on my wrists and perpetual wounds on my palms, who was lithe and strong and graceful but who boiled in shame anyway. The coaches and the teammates and even my parents couldn’t quite give me that grace to say I was anything worthwhile. I wasn’t great enough to matter, so what I did do was pointless: that feeling was what stretched and started to dissolve a bit, last night.

I wasn’t an Olympian. I didn’t earn a scholarship. I was a lowly class II gymnast. I didn’t sacrifice hard enough, I didn’t give enough, I wasn’t enough: I have carried that feeling for my whole life.

Her decision bolsters all gymnasts.

In that moment, she chose what was right for her. That is never allowed in gymnastics, but she did it. Her choice tells us that we matter. Not because of medals or scholarships or rankings, but because we are individuals with bodies in the world. Because she matters—as a person, not as a medal winner—the rest of us matter too.

And it is why—not because of the five moves named after her—that she will always be the greatest of all time.