In Defense of Running

On Friday at my physical therapy appointment, there was a woman on the table beside mine who was having her knee worked on. She was telling the tech doing ultrasound how she’d injured it: she decided to start running. She ran for three miles (“that distance seemed easy enough”) for a couple of days and by the end of the week her knee was swollen. So she went to an orthopedic surgeon (“one of the most famous surgeons in Utah”) who told her that no one should ever run because it’s bad for your knees. Then she stopped talking to listen to me explaining to the tech who was helping me about my bunion surgery. “Oh, yes. See, running is bad. Running also causes bunions.” 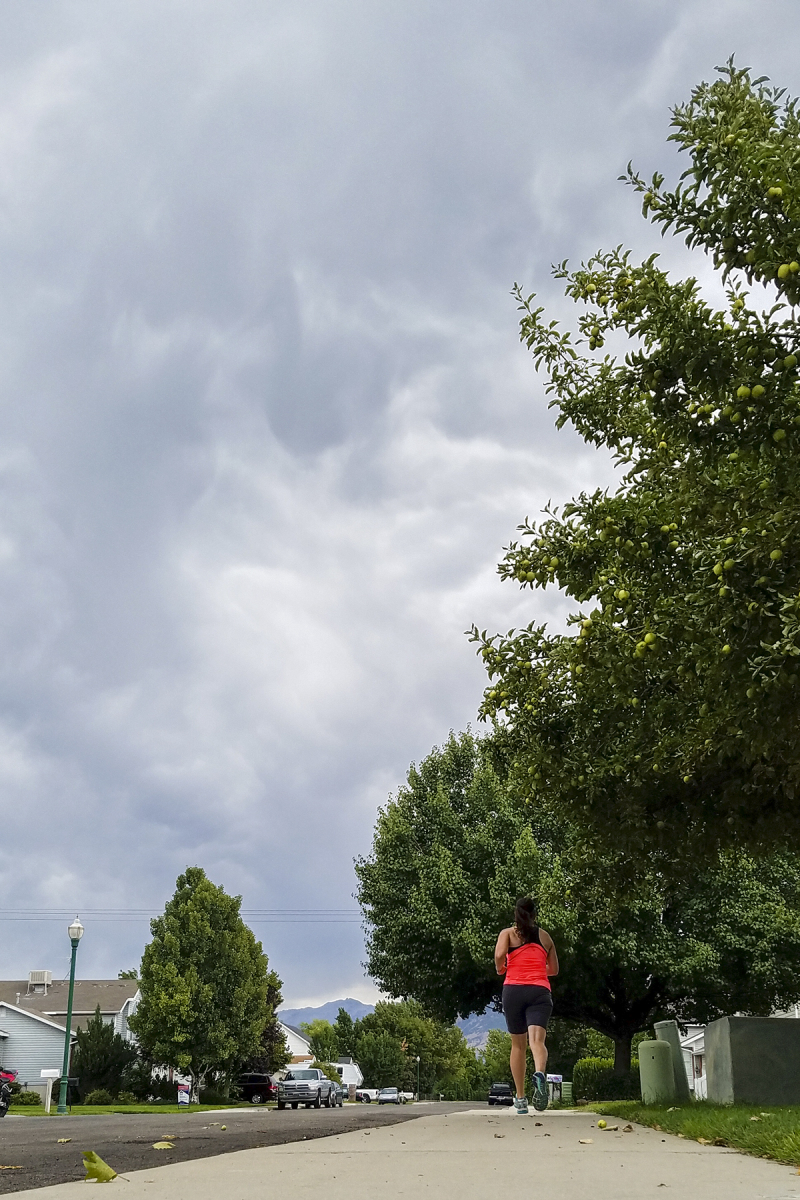 She kept talking for the rest of the appointment and inwardly I was seething. I’m already seen as the “bad” patient in this office, because once I accidentally said the F word. (Utah is a weird, weird place.) So I just seethed quietly, and maybe rolled my eyes a few times, and didn’t say what I wanted to say:

And you know what’s bad for your knees? Deciding one day that you want to be a runner and then just tossing on a pair of shoes and running three miles.

But ever since I started running 21 years ago, I’ve heard the same thing about running. From friends, family members, coworkers, random strangers: running is bad for you.

Even as recently as my surgery, several people told me that I must’ve torn my tendon because I run too much.

These comments always come from people who aren’t actually runners.

Here’s the deal: Running is like any other sport. There are things to learn, research to do, techniques to understand.

Of course if you just randomly run a few miles, your body is going to hurt somewhere. People tend to think that since running is a similar motion to walking, and since walking is what people do, then it follows that you already know how to run.

In my two decades of being a runner, I have taken two running classes from a local running coach. I’ve had my gait analyzed by professionals and spent months teaching my body how to adjust to a proper cadence. I’ve read countless books and articles about techniques. I do push-ups and ab work and hip-girdle exercises, yoga and pilates and barre because I learned that strong muscles mean fewer injuries. I do cross training and take rest days. I’ve been injured and learned that it is part of being a runner. I’ve learned about overtraining, about the muscles that are generally weak in people who run, about how to stretch properly to release the strain that the repetitive motion of running causes. I’ve made mistakes and done it wrong and started again. I’ve had long discussions about the correct shoes with employees at running-shoe stores. (Dick’s doesn’t count.) I’ve experimented with different socks and anti-friction creams. I’ve learned how to time my runs around my meals, how to fuel without getting nauseated during long runs, what to eat after a run.

You wouldn’t decide one day “I’m going to be an ice skater” and then attempt a toe loop without getting injured. You wouldn’t take up rock climbing without first learning how to use your equipment.

“Running damages your joints” is actually a myth. We are discovering, as people have begun running longer and longer, that our bodies adjust. The joints of a runner at the end of her life will actually be stronger than the joints of a non-runner. (HERE is just one article but there are many.)

What makes a bunion form is either wearing too-restrictive shoes or genetics. I’ve never really loved pointy high heels and have basically lived in Doc Marten’s for a good portion of my adult life. Foot problems run deep in my mom’s paternal line; my sister has had bunion repair, too, and she and some of our grand-nieces and nephews have club feet. I’m 99.99998725% sure that running did not give me bunions.

And as for too much running causing the tear in my plantar plate…only kind of. What often causes second-toe capsulitis (which is the beginning of where I ended up, with my tendon torn and my toe flopping around) is abnormal foot mechanics, which are often caused by a…bunion!

The bunion that I investigated having removed 10 years ago, which my insurance wouldn’t pay for because since it wasn’t causing me pain, it was only “cosmetic.”

Maybe if I had only sat around for the past twenty years and not done any running at all (or hiking or walking) the tear would’ve been delayed. But until the bunion was repaired, the capsulitis would only get worse.

Yesterday I talked to a neighbor I haven’t seen in a while, and he asked me why I was so anxious to get back to running. “Why not just do other things?” he asked.

And I think it is a thing you don’t understand until you actually do it. Until you feel what it’s like to be seven miles into a ten-mile run and you suddenly notice how your body is singing with movement, under the blue sky. How your skin is soaking in sun even as it drips sweat, and how deep your lungs are pulling in air, and how alive you feel. Or until you have the confidence of knowing you can always get yourself back home on your own two feet. Or the pleasure of driving past somewhere you’ve run. The excitement of slipping your feet into your shoes at the start of a run. The sweet relaxation of drinking something cold and fruity while you stretch after. All of it.

I will always be willing to put in the work that allows me to continue running and I hope I can do it until I am very, very old.

A few weeks ago, when I was approaching the doctor appointment where I would likely be able to stop using my crutches and put some weight on my foot—actually walk!—I grew more and more nervous. Eight weeks (and two days) is a long time to go without walking, and my mind just sort of stopped being able to imagine my body moving that way. I coached myself through the nerves by reminding my brain that I’ve been walking for, oh…47 years. I even asked my older sister if she remembered any stories about when I started walking as a baby, or if I was an early or late walker (alas, she did not).

I worried and fretted and had bad dreams until finally that appointment came. My podiatrist fit me with a walking boot and then it was time. My hands were shaking. I had to take several deep breaths before I actually did it. And that first step…wow. My leg felt so weak. Not just my foot, or my calf which had withered away, but from toenail to hip, my muscles were jelly. I was determined not to cry in front of the doctor and Kendell, and I didn’t. (Must maintain badass status.) But there were tears in my eyes and a lump in my throat.

How strange to be terrified of walking, that most human motion. 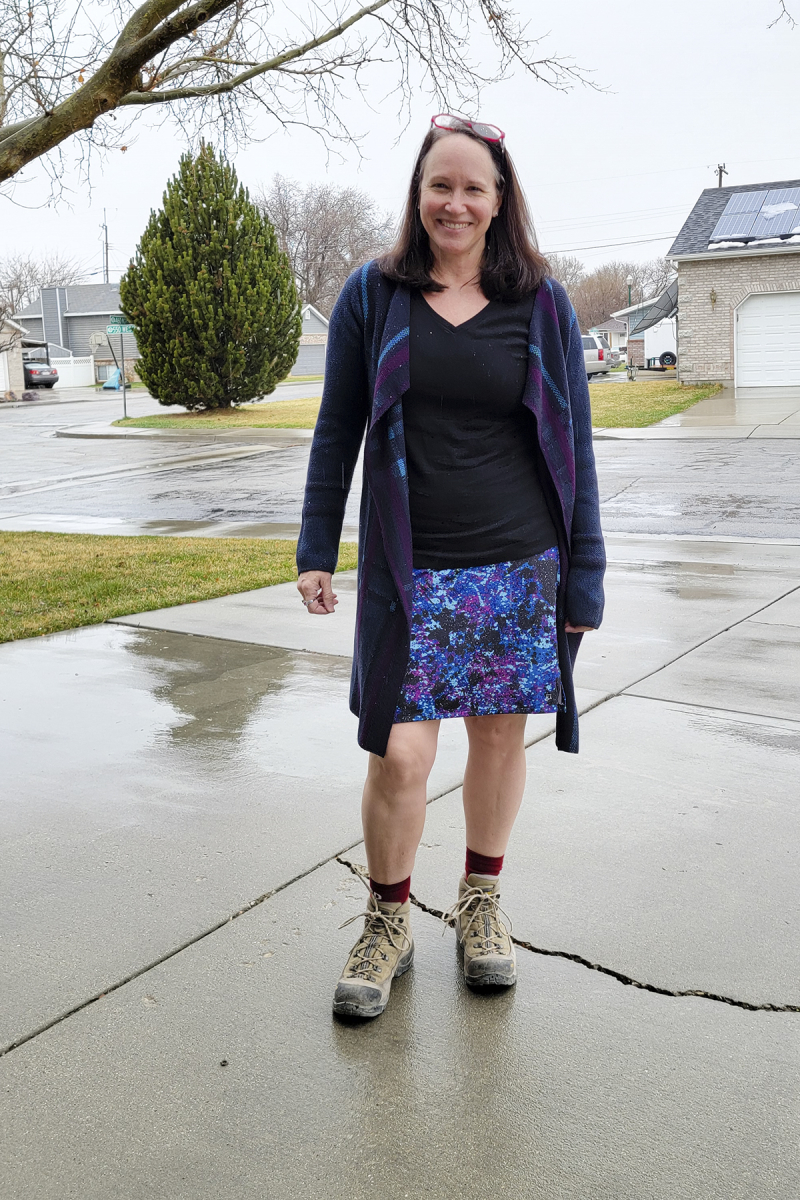 (my first post-surgery walk in shoes)

Three weeks later, I have now been spending some time walking in actual shoes. I still sometimes wear my boot, if I know I will be on my feet for a long time. I actually have to practice walking, because my gait is totally off and I am easing in that tendon, not wanting to stress it out at all, afraid of any little twinge or pull.

(I need to start physical therapy but it feels overwhelming.)

And I have been thinking about walking.

In boots on the top of a mountain, when I’ve made it to my destination and can just stroll around, seeing what I can see there.

Along a sandy beach, carrying my sandals.

Carefully, barefoot, along the stony, burbling path of a creek.

Places I have walked in my life: across the sandstone and the sand at Lake Powell. The Green Sands beach on the Big Island. The soft green grass of the yard of my childhood home. On tiptoe atop a balance beam, in ballet shoes across a stage. Down streets in Amsterdam, London, Paris, Brussels, Rome. Into and out of hospitals and in paces across waiting rooms, anxious for yet another of Kendell’s surgeries to be successful. In front of the white board in my classroom. For a final time, out of the home I grew up in. Into a restaurant to meet a friend. Down the hall into the baby’s room, just to watch him sleep.

I have annoyed my teenagers by walking too fast through the mall and been annoyed by slow walkers in the exit line at Costco.

And I have thought about how, for those 47-something years of walking, I took it for granted. It’s what we do, as humans, the way we move within our world, the way we experience and process and get places. I never really pondered a life without walking, until now, when my two-thirds-of-a-mile loop walk takes me 20 minutes to finish and my foot is pounding when I’m done. So slow. So awkward. And knowing that even that, the slowness, the awkward pace—even that is a blessing. A privilege.

So as I continue on, improving my walking ability (I sometimes feel like a very old, slightly wrinkled, surprisingly grey-haired giant toddler these days), I will keep this knowledge. Walking, which seems so quotidian, is magic. I won’t ever take it for granted again.